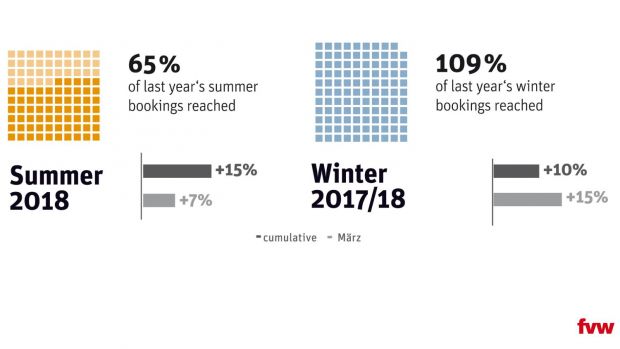 Holiday sales in Germany grew by 10% last month as consumers kept booking summer and winter holidays in good numbers, according to the latest monthly GfK analysis.

Growth was faster than in February, which saw a 6% increase, although lower than in January, when the year kicked off with a dynamic 17% surge, a comparison of recent trends showed.

Revenues for summer holidays increased by a solid 7% in March while there was good demand for late winter holidays in March and April as well as healthy early bookings for next winter, the market researchers’ analysis of sales by 2,000 representative travel agencies, OTAs and tour operator websites found.

Summer 2018 now has a culminated sales increase of 15% compared to last year, even though the strong 18% growth seen in January is now gradually falling back to more normal growth rates. The bulk of the growth over the last two months has been generated by online bookings rather than by travel agencies, according to the market researchers.

The strongest growth month this year with a 39.5% revenue rise is May, when spring holidays take place in various regions. This month currently accounts for as much as one fifth of all revenues generated in German travel agencies and online, according to the GfK Travel Insights survey.

In total, nearly 69% of sales revenues in March were generated by bookings of summer holidays between May and October. About a quarter of these revenues were for trips in early summer (May/June) and the same share for the main travelling period of July/August.

Significantly, many Germans booked winter holidays with departures in March or April at short notice last month. Sales revenues from late winter bookings increased by 15% compared to the same month last year and accounted for 17% of total revenues last month. However, this will not significantly affect the overall figures for the winter season, which are showing a 10% cumulative increase to date.

Moreover, about 14% of sales revenues in March were generated by early bookings for next winter. There was a 14% rise in revenues for holidays from November onwards, indicating good demand for the coming months, the Nuremberg-based market researchers said.