ITB had no slots for alternative date

Messe Berlin was unable to find any alternative dates to hold ITB later this year and is now reviewing compensation claims from exhibitors.

ITB chief David Ruetz told fvw in an interview that “of course” the show organisers looked at the option of holding ITB later in 2020 once the decision to cancel this week’s show was taken. But the long-serving manager emphasised: “There is simply no other slot for such a large event as ITB Berlin with 10,000 exhibitors from more than 180 countries.” The Berlin trade fair grounds are mostly booked out throughout the year.

Moreover, he added: “The annual date of ITB Berlin is chosen deliberately as our participants mostly do business now or around March and summer is the main travelling season.”

Looking ahead, Ruetz continued: “No alternative event is planned but rather expansion of our digital offering. For example, on itb-berlin/events we are communicating events that are taking place despite the cancellation of ITB.”

Financially, the ITB chief expected “a substantial impact” not only for Messe Berlin but also Berlin and the whole travel industry. He confirmed that Messe Berlin has set up a hotline for exhibitor queries and will look into the question of refunds and compensation for exhibitors. 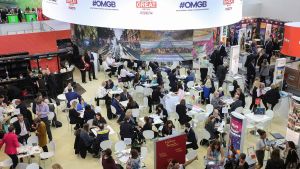