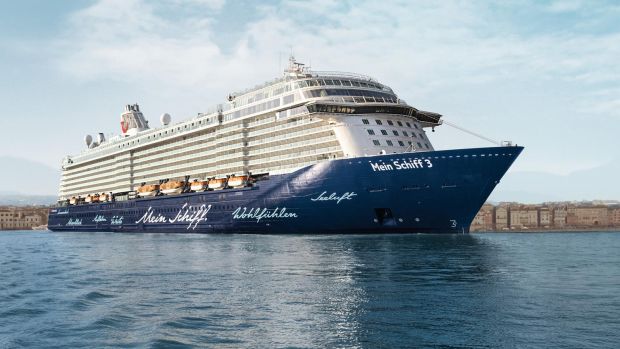 More Germans and other Europeans are going on ocean cruises than ever before as new vessels continue to drive demand, according to new figures from industry association CLIA.

Worldwide, some 28.5 million passengers went on a cruise holiday last year, a 7% rise on 2017, the Cruise Lines International Association (CLIA) said yesterday. This was faster growth than global tourism as a whole, indicating that cruises have again won market share compared to beach holidays and other forms of organised travel. The dominant North American market grew by 9% to 14.2 million passengers, and thus represented nearly half of the global market.

In Europe, ocean cruise passenger numbers grew by 3.3% to 7.2 million, which represented faster growth than in 2017 when numbers increased by 2%. In terms of destinations, more Europeans headed for the Eastern Mediterranean, up 8.5% to 746,000 passengers, reflecting greater consumer confidence in the region. The central and western Mediterranean region remained the biggest destination for European cruise passengers, up by 1.2% to 2.3 million passengers. Northern Europe grew by 4.8% to 1.4 million passengers.

Germany remained the largest cruise market in Europe, growing by 3% to 2.2 million passengers, according to CLIA’s annual review. In contrast to the wider regional market, Northern Europe is the top destination for German cruise holidaymakers (28%), followed by the western Mediterranean (23%) and the Baltic Sea (8.4%). Significantly, the average age of German cruise passengers continued to fall last year, from 50 to 49, while the average cruise length increased slightly to 9.1 days.

Moreover, experts believe the German cruise market revenues are likely to have grown at a faster rate last year due to higher average prices. For example, fvw’s annual tour operator dossier, published in February, found that the ten largest cruise operators increased their combined revenues by 11% to nearly €4.7 billion on a 7% rise in customer numbers in 2018.

Stronger growth is expected this year as new ships such as the Aida Nova, Mein Schiff 2, Costa Smeralda and the MSC ships Bellissima and Grandiosa go into operation.

The UK and Ireland remained in second place among European markets last year, with a 2% rise to just over two million passengers, the CLIA figures showed. 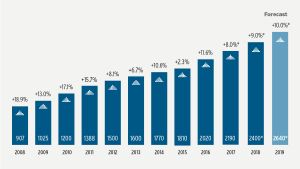