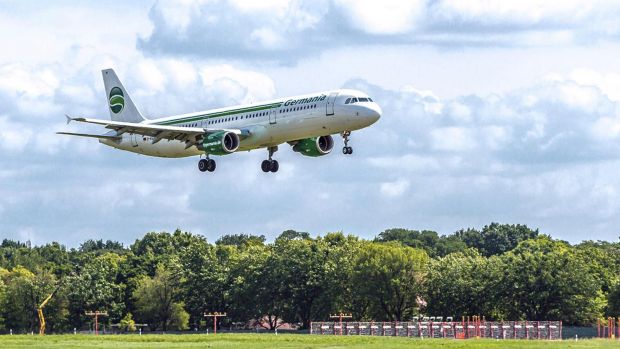 The niche carrier, which mostly operates regional routes to holiday destinations, announced last Saturday that it had found a solution to cover its short-time liquidity needs. CEO Karsten Balke said: “With regard to our financing efforts, we have received an important commitment today. In total, the financial support now exceeds the initial target amount of €15 million. We should receive the funds in the next week.” The airline did not disclose who has provided the funding.

Germania emphasised that as a result of the financing commitment its medium- and long-term viability as an independent medium-sized airline “has been secured”. The airline stated: “The booking situation is good, advance booking figures for the coming months and for the entire 2019 summer schedule are above those of the previous year.”

Balke added: “I would like to explicitly thank all of our partners for their past trust and support, especially in recent days. In this phase of uncertainty, our team succeeded in securing our flight operations without disruptions, all Germania flights were operated as scheduled. I am proud of our employees and would like to extend my special thanks to them.”

The airline’s financial problems became public in early January when it disclosed a short-term liquidity gap that it was partly able to fill after a few days thanks to financial support from undisclosed persons. It blamed its financial difficulties on a challenging year in 2018, including higher fuel prices, exchange rate effects and delays in delivery of new planes.

However, the CEO told fvw last week that the liquidity gap had resulted from “excessive assurance demands from our contract partners” due to the airline’s poor financial result in 2018. He declined to name these partners, although he underlined that Germania did not have any debts to its banks.

Looking ahead, Germania said it will “intensify, optimise, or, if necessary, correct the strategic and structural developments” that were started in the past.

Regional airports welcomed the news that the airline had resolved its financial problems. Nuremberg airport chief Michael Hupe declared: “Germania was and will in future be a reliable and important partner for Nuremberg airport.” The airline has stationed two planes at the airport to fly to 29 destinations in 12 countries.

Similarly, Rainer Schwarz, head of Münster/Osnabrück airport, commented: “We welcome the fact that Germania has apparently filled its financing gap for the winter, which is always difficult in tourism.” From the northern German airport, Germania flies to 20 destinations with two locally-stationed planes.

Germania, with a current fleet of 37 planes, flies more than four million passengers a year to 60 destinations in Europe, North Africa and the Middle East. It has not published results for 2017 yet but in 2016, according to official accounts, the airline made a loss of €7.7 million on turnover of €369 million.

The airline has embarked on a major fleet modernisation programme with an order for 25 brand-new Airbus A320neos, with deliveries due from 2020 through to 2022. These would replace older Airbus jets and leased Boeing planes.