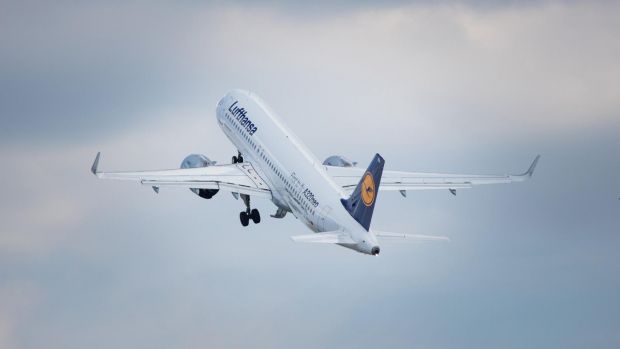 Lufthansa
Lufthansa's A-320neo planes are among the most modern aircraft types.

The German aviation industry, led by Lufthansa, has won government support for technological and technical solutions such as synthetic fuels and emissions compensation to reduce the sector’s environmental impact as it seeks to avoid a new CO2 tax on air fares.

Amid rising public criticism of flights as ‘climate killers’, Chancellor Angela Merkel said at a ‘national aviation summit’ at Leipzig Airport yesterday that Germany should become a leader in aviation environmental protection, particularly with aircraft technologies, and should avoid “forced restrictions”. She emphasised: “It’s important that the industry can show that growth is not always connected to an increase in climate-harming emissions.” The chancellor added: “We don’t want any forced restrictions on our mobility.”

Transport minister Andreas Scheuer called for the €1.2 billion annual proceeds from the German aviation tax to be used for research and innovation to help make ‘clean’ synthetic fuels cheaper to use. Some politicians, including the Greens, have called for the existing aviation tax to be doubled but also want the proceeds to be dedicated to developing low-emission aircraft and climate-neutral alternative jet fuels.

The tax, introduced back in 2011, currently lies at €7.50 for short-haul flights, €23.43 for medium-haul services and €42.18 for long-haul routes. Under current German law, however, tax revenues cannot be used for a specific purpose, such as aviation R&D.

On September 20, the German cabinet is due to agree on an overall package of environmental protection measures to help the country meet its international CO2 reduction targets.

Klaus-Dieter Scheurle, president of the German aviation industry association BDL, emphasised that the sector wanted to agree with public authorities on environmental measures, particularly for the development and mass production of synthetic jet fuel that could replace fossil fuels in the long term, and reduce aircraft emissions to zero. On the controversial issue of a CO2 tax, the BDL sees the existing emissions trading system and an international CO2 compensation scheme as the best tools to achieve lower emissions.

Lufthansa CEO Carsten Spohr told journalists this week that more efficient aircraft and new jet fuels are the two main ways of enabling airlines to reduce emissions. He also emphasised: “We are the only transportation mode that is part of European emissions trading and so has been growing climate-neutrally for the last eight years.”

As part of its sustainability activities, the German airline group has launched an innovative scheme called ‘Compensaid’ in cooperation with its long-standing partner, the Swiss climate protection foundation myclimate. This enables airline passengers to offset their individual carbon footprint by supporting the development and use of zero-emission synthetic Sustainable Aviation Fuel (SAF).

"Compensaid" combines an innovative tracking tool for flights of all airlines worldwide with a sustainability platform that makes it possible to directly offset one’s personal CO2 emissions. Travelers then receive a detailed evaluation of their entire travel history, which not only includes flight distance, time and destinations, but also shows the efficiency of the respective aircraft type, individual fuel consumption, and the associated CO2 emissions.

For the first time, passengers can replace fossil aviation fuels one-to-one with SAF, Lufthansa explained. The platform calculates the market-based surcharge in comparison to fossil kerosene. Travellers willing to pay this surcharge can use it to cover their individual kerosene consumption with the climate-neutral fuel. The Lufthansa Group will continue to pay the basic rate for the kerosene, and the SAF purchased as part of the offsetting process will be deployed on Lufthansa flights within a period of six months.

“This is the first online platform of its kind to provide end customers with a transparent, quick, and effective way to offset their CO2 consumption when flying using CO2 neutral fuels,” Lufthansa emphasised. As an alternative, travellers can also use Compensaid to support a reforestation project in Nicaragua and thus reduce emissions over the long term.