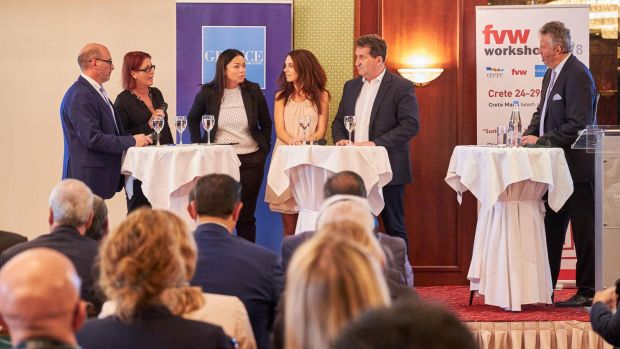 Crete has had a strong year on the German market, can look forward to further growth thanks to moderate price increases in 2019, and should invest in its potential as an all-year destination, participants agreed at the recent fvw Workshop Crete.

More than 30 German travel agents, tour operator managers and other experts travelled to the largest Greek island for the fvw event, which included a one-day conference with hoteliers, airlines and tourism chiefs, as well as several days of tours to experience tourism products and services at first hand.

Germany is a vital source market for Crete and with about one million tourists a year contributes nearly 25% of the island’s total visitor numbers. Konstantinos Tsegas, general secretary of the Greek National Tourism Organisation, said that German visitor numbers could increase by 20% to a new record of 1.15 million this year. Overall, Crete could welcome about 4.2 million tourists, which would be 7% more than last year. For Greece as a whole, the German market could grow by over 19% to 3 million visitors this year, he predicted.

Tour operators made clear that they are very happy with strong double-digit demand for Crete this year. Flight capacity was even short for last-minute bookings this summer, Andrea Nordmann, Greece contract manager for Alltours, said at the workshop conference.

Against this positive background, several tour managers cautioned hoteliers to beware of excessive price increases for 2019. Mario Krug, sales manager for LMX, warned that price-sensitive customers who switched this year from high prices in Spain to more moderate deals in Greece could lose their caution about holidays in Turkey next year. “Don’t make the same mistake as Spain and be careful about pricing trends,” he urged hoteliers.

These appeals seem to have been heard, and prices will only rise moderately for next summer, due to higher taxes for hoteliers. TUI packages for Crete, for example, will be 3-5% more expensive. Halina Strzyzewska, TUI product manager for the Eastern Mediterranean, called for moderation in the coming years as well.

Richard Bodrecht, FTI’s Chief Commercial Officer, pointed out that Crete “is having a hard time at the moment” in terms of early bookings for next summer. Enquiries for Greece holidays are currently down by a double-digit rate, according to Traveltainment figures. Alltours’ Nordmann had a clear message: “We want to convince hoteliers to maintain their 2018 early booking offers in 2019 as well.”

Leading German tour operators are fundamentally optimistic about the destination, however, and are investing in more flight and hotel capacity. FTI, for example, wants to grow substantially on Crete, has increased fixed charter capacity and will expand its main hotel brand Labranda significantly on the island.

Alltours has contracted rooms in 20 more hotels for next summer, will re-open the Malia Beach as the third Allsun Hotel on the island and is actively looking for more hotel acquisitions, according to Nordmann. TUI, the largest tour operator to Greece, will increase TUIfly capacity to Crete, which accounts for about 40% of its total Greece business, and will open a new Robinson club resort on the island in 2020.

Discussing the long-standing topic of how to lengthen the holiday season on Crete in order to win new customers, TUI’s Strzyzewska emphasised: “Everyone has to play a part, from airlines to hotels and restaurants.” Majorca, with its diverse offers for golfers, hikers and cyclists, could be an example. FTI manager Brodrecht declared: “Crete has as much potential for activities outside the hotels as Majorca did 20 years ago.”

Among German specialist tour operators, Ina Siegel, who organises trips for marathon runners, urged local officials to think about organising half-marathons and trail running events. Ewald Schilberz, from Professional Training Tours, stressed the need for better infrastructure, such as for cyclists and other sporting visitors.

Workshop participants who took part in the tours praised Crete’s diversity. “I’m impressed by Crete because it has a lot to offer not only package holidaymakers but also individual travellers,” commented travel Andrea Ihle.

On the Greek side, Michalis Vamiedakis, Crete’s tourism commissioner, highlighted the potential for much more tourism away from the beaches given the island’s rich diversity of attractions and activities. He also highlighted the substantial investments by Cretan hoteliers in recent years, including modernisation and upgrading measures. Grecotel alone, for example, has invested €42 million this year in its hotel portfolio. Mike Vlatakis, president of the Cretan incoming agency association, declared: “We want more high-value customers.”

GNTO chief Tsegas said a planned new airport in Kastelli, south-east of Heraklion, could “perhaps” open in two years’ time, while work was progressing on extending the main north coast road further to the east. He emphasised that higher hotel taxes had not had any significant effects on tourism.