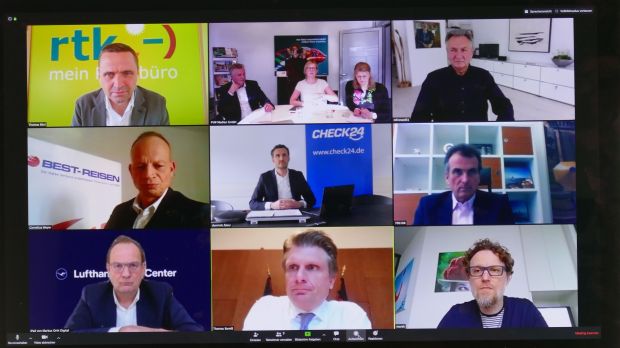 fvw/IL
Meeting on a screen: German tourism chiefs during the fvw video conference.

The German tourism industry needs cash as quickly as possible to survive the coming weeks as well as possible and save something of the summer 2020 season, top managers said in an fvw video conference.

With virtually no revenues and running costs for salaries, rent and other operations, tour operators and travel agents alike are in a dramatic financial situation at present, the eight participants agreed in a video conference that replaced fvw’s traditional physical round-table summit.

“We are calculating with a scenario of six months and have applied for short-term working until the end of August,” said Markus Orth, managing director of the Lufthansa City Center travel agency chain. “We are facing tough weeks and months ahead.”

Travel agents have not only lost booking revenues but also face losing commission payments from tour operators who cancel booked holidays, pointed out Cornelius Meyer, managing director of the Best-Reisen travel agency chain. But Thomas Bösl, head of the QTA alliance, was more optimistic. Agencies had been hit hard but past experience had shown they are “extremely capable of surviving”, he declared.

“The question is, how long can we keep going?” commented Michael Frenzel, president of the German Tourism Industry Federation (BTW). Listed companies whose share prices collapse could become takeover targets, warned the former TUI CEO. Moreover, the crisis is hitting destinations hard with the closure of all leisure hotels, Frenzel emphasised. “There will be disruption in the destinations,” he predicted.

From the tour operator side, Marek Andryszak, CEO of TUI Germany, stressed: “We could re-start business relatively quickly again as we take integrated decisions for sales, the airline and our hotels.” But he pointed out that even if consumers started to book summer holidays in the next few weeks volumes would still be well below last year due to the loss of strong booking weeks during the spring. “I’m putting my hopes on the second half of the year.”

Meanwhile, the image of the cruise industry has been severely damaged by the Diamond Princess quarantine in Japan. “In retrospect, it was a completely wrong decision by the authorities,” claimed Jörg Rudolph, Germany chief of Costa Cruises. “You cannot put an entire ship under quarantine and hope that the passengers stay healthy.”