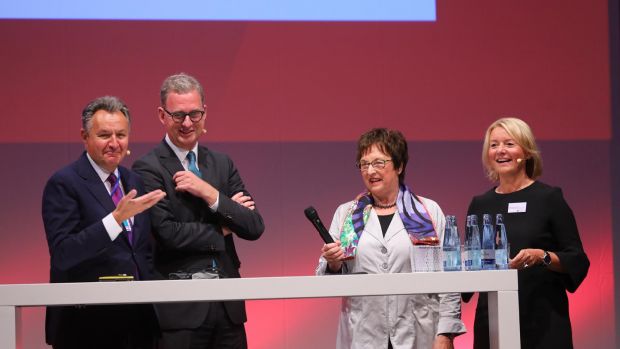 The German government was right to commit €150 million of taxpayers’ money to keep Air Berlin flying this summer and avoid having to get millions of holidaymakers home on emergency flights, economics minister Brigitte Zypries said at the fvw Kongress today.

The experienced politician told a packed conference that Berlin “helped quickly” because it wanted an “organised liquidation” of Germany’s second-largest airline and the main intention was to get German tourists home again during the peak summer holiday season. “We had to give support so that tourists could get home,” she declared.

Zypries emphasised that the German government expected the ongoing Air Berlin sale process to generate sufficient proceeds to enable the €150 million financial aid to be repaid. She also denied that she would prefer a sale to Lufthansa, stressing that the decision was up to the insolvency administrators.

Norbert Fiebig, president of the German Travel Association (DRV), underlined: “The (travel) market needs stable reliable structures in the flight market.” He predicted that German and European competition authorities would look closely at any deal, and suggested it would be more difficult to ensure competition on domestic routes within Germany than on international leisure routes where foreign airlines also provided competition.

In addition, Frenzel called for the creation of a tourism minister, or at least a tourism state secretary, to strengthen the profile of the industry in Germany and abroad. But Zypries rejected this call, saying she was against a tourism or digital minister and said the present structure with a state secretary partly responsible for tourism represented “good coordination” for the sector.

In her presentation, the minister also highlighted challenges facing the tourism industry, including natural catastrophes, the importance of developing sustainable tourism in overseas destinations, the need to ensure digital platforms such as Airbnb paid taxes, and other issues.