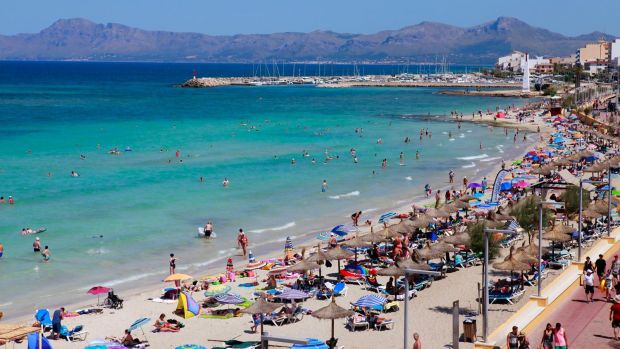 Hoteliers on Majorca have slashed prices to persuade German holidaymakers to return to their favourite Spanish island instead of heading for cheaper destinations such as Turkey and Egypt this summer.

German bookings to Palma have tumbled for at least the past 12 months, including an 8% drop in June, according to monthly sales figures from Amadeus Leisure IT, which processes the bulk of package and last-minute reservations in Germany.

The Balearic Islands regional tourism ministry currently predicts a single-digit drop in German visitor numbers to Majorca in July, August and September, when seat capacity on flights to the island is expected to contract by 6.6%.

This slump is widely attributed to a high price level on the island combined with the recovery of demand for holidays in Turkey. “We have always said that a lot of the holidaymakers in the last few years were only ‘loaned’ and with a recovery by competitors would return again to North Africa or the eastern Mediterranean,” explained ministry spokeswoman Alexandra Wilms.

Moreover, the Balearics want to reduce their dependence on the large German and British markets by attracting more tourists from other countries and by trying to become an all-year destination with a wider product range. “We don’t want to be dependent on just two markets,” Wilms said.

But tour operators and hoteliers are not giving up on the German market and are trying to stimulate demand with a mix of price cuts and marketing activities. More generally, tour operators have flooded the market with price reductions and special offers to try to generate late bookings after fluctuating demand so far this year, and claim these measures are now starting to pay off.

“There is a clear revival in last-minute sales,” commented Thomas Cook Germany, citing stronger interest in Majorca, Turkey and Greece. FTI subsidiary Fünf vor Flug saw good demand for Greece, Egypt and the Canaries last month. Enquiries for the Balearics in the market-leading Bistro reservations system for travel agents rose by 5% last month, according to figures from data analysts TrevoTrend.

Major tour operators claim that their own figures for Majorca are better than the overall market and are hopeful of good late sales after hoteliers reduced rates significantly in recent weeks. TUI, for example, is passing on price cuts of up to 50% and has seen better bookings as a result.

FTI product manager Manuel Morales claims that the tour operator now has slightly more bookings for the Balearics than last year after renegotiating prices as early as January. “Thanks to strong late demand, we expect that we will be able to close the summer season with a good increase in guests (for Majorca),” he said.

Alltours owner Willi Verhuven emphasised that investments in the group’s Allsun hotels on the island are paying off. “Majorca is performing better for us than in the rest of the market and has an increase in customer numbers for the summer,” he commented. 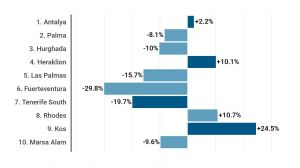 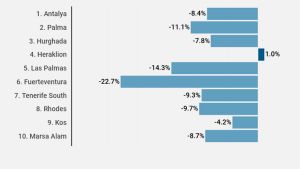 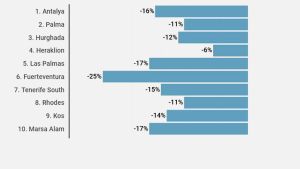