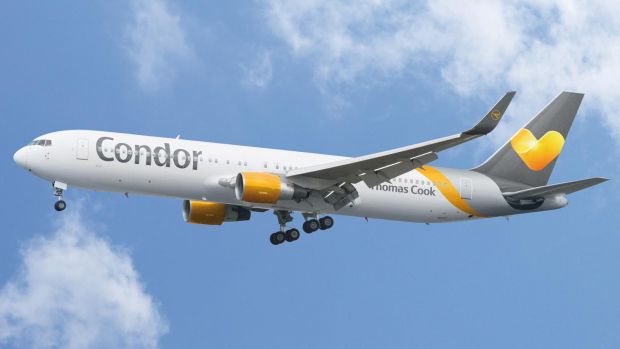 Condor
Condor aims to fly back to profit this year.

Condor plans to cut 100 jobs under cost-saving measures to return to profit while Ryanair will expand flights from Frankfurt substantially next winter.

Thomas Cook’s German airline dropped into the red last year due to a combination of lower Turkey bookings and over-capacity to Spain and other destinations that drove down prices. Condor reported an operating loss of €14 million on revenues of about €1.4 billion and with a 6% drop in passenger numbers.

In response, managing director Ralf Teckentrup has launched a cost saving programme to reduce operating costs by €40 million a year. This is designed to get the airline back into profit this year. He is also aiming for three-digit million euro synergies from closer cooperation between the four Thomas Cook Group airlines.

As part of the ‘Fast Track’ measures, Condor will cut about 100 administrative jobs this year and a further 100 in 2018. Teckentrup told German media that he hopes to reduce the workforce mostly through natural fluctuation.

In addition, four of the airline’s 13 large B757-300s (with 275 seats) will be transferred to Thomas Cook Airlines UK to reduce fleet capacity this summer. Condor will also delay orders for new aircraft to replace the ageing B767 long-haul fleet.

Condor is facing new competition from several sides this year. Lufthansa budget carrier Eurowings will expand by about 25% this summer with the wet-lease of 33 Air Berlin planes, launching flights from Munich and other major airports to holiday destinations.

In parallel, TUI and Etihad Airways plan to combine TUIfly and most of Air Berlin’s remaining leisure fleet into a new leisure airline group that looks set to take off next winter once regulatory approval has been gained.

Closer to home, Ryanair’s headline-making launch of flights from Frankfurt Airport this year will be a new competitive challenge at Condor’s main base. The Irish low-cost carrier will station two B737s at Frankfurt in March and start flights to four holiday destinations (Palma, Malaga, Alicante and Faro) from March 28.

Moreover, Ryanair announced on Tuesday that it will scale up its operations at Germany’s largest airport for winter 2017/18. Five additional planes will be stationed at Frankfurt, and 20 more routes will be added, making seven planes and 24 routes in total. The airline said it plans to fly more than 2.3 million passengers a year to and from Frankfurt.

There will be daily flights to major cities including Barcelona, Lisbon, London (2x daily), Madrid, Milan, Manchester (6x weekly) and Porto, which will attract a mix of business and leisure passengers. New leisure destinations include Venice (daily), Catania, Gran Canaria, Lanzarote and Tenerife (each with several weekly flights).

CEO Michael O’Leary declared: “We are pleased to launch our first Frankfurt Main winter schedule with 20 new routes which will deliver over 2.3m customers p.a. and support 1,750 jobs at Frankfurt Airport. Our 7 based aircraft represent an investment of $700m, which further underlines our commitment to growing traffic, tourism and jobs in the Hesse region.”