Pichler hopeful despite record loss in 2015 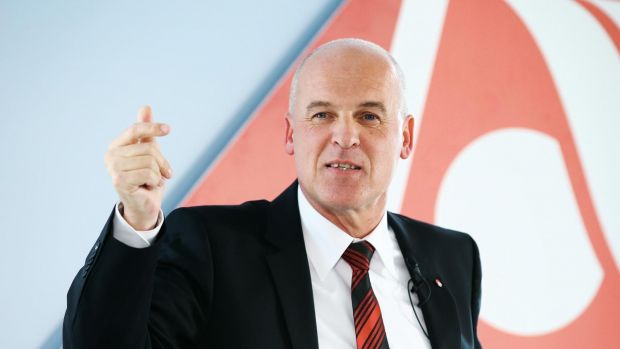 Air Berlin chief Stefan Pichler is optimistic about this year’s prospects even though the airline flew to a record loss of €447 million last year.

Germany’s second-largest airline saw revenues drop by 2% to €4.1 billion in 2015, mostly due to a 6.8% reduction in capacity, while costs were reduced by 1.5% to €4.4 billion. This left the airline with an operating loss of €307 million, slightly worse than the previous year’s €293 million. The overall net loss broadened to €447 million from €377 million the previous year due to the additional financial impact of various taxes and debt revaluations.

More positively, Air Berlin said it made “good progress” in its operational and commercial performance with revenue per available seat kilometre, yield, load factor, operating seat cost and ancillary revenues all improving. The capacity cuts reduced revenues but will show through with lower costs this year.

"Although we reported a significant net loss of €446.6 million in 2015, the underlying fundamentals of our business are now trending in the right direction, and we can look forward to further improvements in our trading performance, especially in the second half of this year,” Pichler declared.

Several factors negatively impacted the financial performance in 2015 including a protracted and damaging dispute over codeshare flights in the final quarter of 2015 and the beginning of 2016, Air Berlin pointed out. “Even if the decision by the Lüneburg Higher Regional Court ultimately led to a pleasing outcome for us and our partner Etihad Airways, the months spent in limbo cost us €40 million in lost or cancelled sales in the fourth quarter of 2015,” the CEO explained.

A second factor impacting the financial performance was the airline’s fuel hedging programme, as Air Berlin benefitted only to a limited extend from the more favourable kerosene price in 2015 and its fuel hedging transactions, coupled with the sharp decline in the US dollar, meant a missed opportunity amounting to more than €200 million. “But in 2016 we will benefit from the relatively low cost of fuel in the order of €250 million,” Pichler added. Other factors that impacted results included geopolitical events such as the terrorist attacks in Egypt and Paris.

Looking ahead, Pichler stated: “I am confident that with this sound basis, Air Berlin will witness an improved trading performance in 2016 thanks to the continued development of our hubs in Berlin and Dusseldorf, a deepening of the commercial relationship with Etihad Airways Partners and oneworld and by taking advantage of lower fuel prices.

“Etihad Airways is committed to Air Berlin and we continue to play a key role towards its success. We delivered €140 million last year in direct passenger revenues to our major shareholder. We have its support for the aggressive and radical restructuring of our business. However, there are still hard decisions to be made, which require the clear support of key internal stakeholders.”

On network planning, Pichler said: “We made the decision in 2015 to add more long-haul flights, mainly to the US. This segment offers growth, better margins and increased customer loyalty as we continue on our path to become a network airline.

“Moreover, we are deepening our existing cooperation with Alitalia to strengthen further air connections between Germany, Austria, Switzerland and Italy. Customers benefit from up to 25% more weekly non-stop flights to Italy. The deeper cooperation with Alitalia paves the way for enhanced competiveness and our common passengers are already benefitting from greater travel comfort, improved connections and a much more attractive route network.

“The partnership between Air Berlin and Etihad Airways offers a better range of flights and destinations for passengers, plus strong growth potential. Overall, the two airlines saw passenger numbers grow in 2015 by more than 20% to 720,000,” Pichler said.