With hundreds of thousands of advance bookings cancelled by Thomas Cook Germany following its insolvency in late September, many customers played safe over the following month and booked another holiday instead, either last-minute deals for the autumn half-term school holidays in October, or for the coming winter season.

As a result, sales revenues for last-minute holidays in October (the final month of the summer 2019 season) soared by a dramatic 33% compared to the same month last year, albeit on low volumes, according to analysis of sales by 2,000 representative travel agencies, OTAs and tour operator websites by market researchers Travel Data + Analytics (TDA).

This last-minute surge left overall sales for the summer 2019 season up by 1%, and thus showing low growth after months of fluctuating demand compared to the strong previous year. Despite the late re-bookings by Cook customers, travel agents ended the summer with a 1% drop in revenues while online channels generated solid growth of 7% compared to summer 2018.

Overall, the 2018/19 tourism year closed with a low 2% increase in sales revenues as a strong winter season partly compensated for the weak summer season.

The same ‘Cook effect’ generated a 10% rise in bookings for winter 2019/20 holidays (from November onwards). Notably, travel agents profited mostly from this effect, with a 12% increase in revenues compared to a low 3% rise in online sales. As a result, cumulative sales revenues for the current winter season have improved from -4% to -1%.

Importantly, however, the TDA figures do not yet include any cancelled Thomas Cook holidays due to reasons connected with German insolvency law. Such consolidated figures, showing ‘new’ bookings minus cancelled ‘old’ bookings, would be significantly lower.

Looking ahead to summer 2020, demand appears to be weak at this early stage of the booking cycle. Revenues for holidays in summer 2020 were down by 10% as of end-October.

TDA pointed out that one reason could be general uncertainty among consumers following the Cook insolvency, while another factor is the later publication of summer brochures by other leading tour operators. 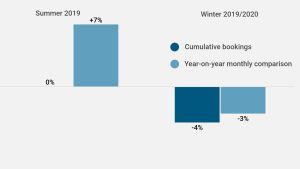 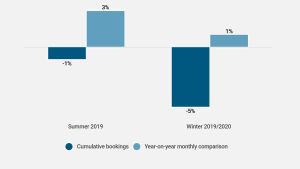