Passenger numbers increased by 14% to 2.8 million and revenues by 11% to €5.2 billion for the ten largest companies on the German/Austrian/Swiss markets, according to fvw’s survey of ocean and river cruise operators as part of the annual dossier. This is in line with figures from the industry association CLIA, which reported a high 18% rise in German passenger numbers in the first nine months of 2019 after minimal growth of just 3% in the previous year.

But this sales growth was also accompanied by aggressive pricing and countless special offers as the cruise lines sought to fill their vessels and achieve near-100% capacity utilisation. Average prices are believed to have dropped as much as 5%, according to industry sources.

This trend showed up especially in the figures for market leader Aida, which introduced the Nova (with 2,626 cabins) into its fleet last year. According to fvw estimates, the Carnival Corp-owned cruise operator extended its market leadership with an 18% rise to 1.29 million passengers while turnover grew more slowly by 14% to €2.1 billion.

TUI Cruises, which added the new Mein Schiff 2 to its fleet last year, was more successful in maintaining stable prices and 100% capacity utilisation. The TUI/Royal Caribbean joint venture increased passenger numbers by 16.4% to 619,000, while revenues increased by 15.9% to €1.45 billion, according to fvw estimates.

Phoenix Reisen remained the third-largest cruise operator on the German market with solid growth of 7.7% to 180,000 passengers and a 9.2% increase to revenues of nearly €392 million.

Among the major international ocean cruise lines, MSC Cruises grew well on the German market with passenger numbers and revenues up about 9% while Aida sister company Costa followed the general market trend with 8% more passengers and a 4% revenue increase, according to the dossier.

In contrast, TUI’s luxury cruises brand Hapag-Lloyd Cruises suffered a 10% drop in passengers to 25,000 and a 2.5% fall in revenues, largely due to the absence of a second expedition ship between September 2018 and May 2019. But the company stressed it had “a very positive rate and business development” last year.

Meanwhile, river cruise companies, who had largely stable capacity last year, appear to have had a very successful year in 2019. Market leader Arosa increased turnover by over 7% to €98 million thanks to a 2.7% rise in passenger numbers to 88,000 and higher average prices. Rival Plantours achieved a very strong 22% increase in passenger numbers to over 20,000 while 1A Vista Reisen grew by 8% to more than 31,000 customers. 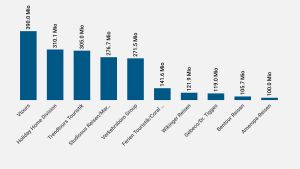 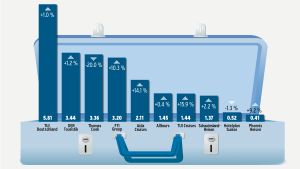