Egypt, Turkey and Tunisia grow fast on German market in 2019 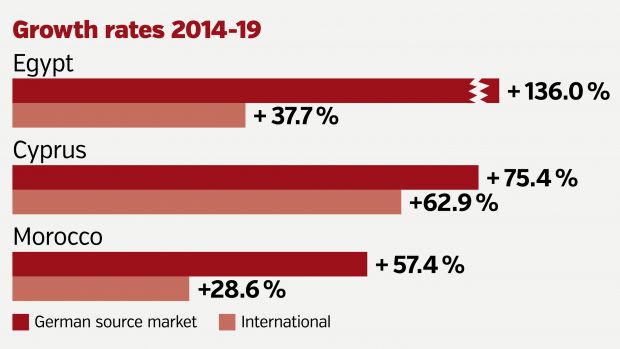 Egypt, Turkey and above all Tunisia were among the big winners while Spain, Greece and Portugal lost business in Europe’s largest outbound travel market, visitor figures for 2019 show.

Egypt also clearly topped the five-year growth comparison table with an impressive 136% surge in German tourist numbers and nearly 38% more international visitors in total. Both Cyprus and Morocco also performed strongly with high double-digit growth between 2014 and 2019, the ranking showed.

Last year both Egypt and Turkey maintained their strong comebacks of the last few years while Tunisia grew strongly as German tourists regained confidence in the destination.

The North African country’s comeback appears to have hit another low-cost short-haul beach destination. Bulgaria suffered a drop in visitor numbers from all source markets combined, including a dramatic 23% decline from Germany.

Spain struggles to compete on price

Meanwhile, tourism heavyweight Spain had another disappointing year as it struggled to remain competitive on prices with competitors further east. The collapse of Thomas Cook was a particularly heavy blow as the second-largest tour operator in the UK and Germany regularly brought millions of tourists to the country every year. Many Spanish hoteliers ended up with unpaid bills. This year is also looking challenging so far and many hotels on the Balearic Islands are planning to open later than usual for the summer season.

It was a mixed picture for Greece last year. The country continued to attract more international tourists and increased the number of overnight stays. But there was a significant drop on the German market accompanied by a shorter average length of stay. For 2020, the tourism ministry is forecasting 5% increases in international arrivals and overnight stays, which would generate a 10% rise in tourism earnings. Once again officials are focusing on lengthening the summer season. But in the past a lack of flights, hotel capacity and attractive offers for tourists held airlines and tour operators back from taking risks.

Flight capacity was also a major topic for Portugal and Cyprus last year. Both destinations achieved growth in international arrivals, but on the German market they suffered a drop in visitor numbers due to insufficient flights.