Challengers catch up on top destinations 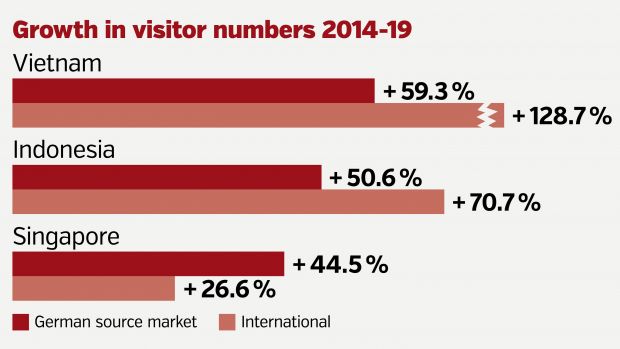 fvw
The three fastest-growing destinations in South-East Asia over the last five years.

Smaller destinations in South-East Asia are growing faster than better-known larger rivals in the region, the fvw Destination Ranking 2020 showed.

Thailand, for example, just failed to reach its target of 40 million international visitors last year. Moreover, the second-largest long-haul destination for German tourists saw fewer visitors from this vital source market for the first time since 2014. The number of German visitors dropped by 4% to 855,000 in 2019. Thailand managed to increase total international visitor arrivals by 4% but this was only half as much as in the three previous years.

A big winner last year, however, was Vietnam which welcomed more than 18 million international guests, a rise of 16% on 2018. The country also did well on the German market with a 6% increase in arrivals. Indeed, Vietnam topped the five-year growth comparison, more than doubling the number of international arrivals between 2014 and 2019. The country is investing in massive hotel complexes, numerous entertainment parks and casinos in order to win tourists from neighbouring China, in particular.

Similarly, the Philippines enjoyed a very successful year with a 16% rise in international visitors. In addition, after years of only moderate growth, the island state attracted many more German tourists in 2019, with a 13% increase to more than 100,000 visitors for the first time.

South-East Asia’s fastest-growing destination last year was Myanmar with a high 27% rise in international arrivals. This is likely to have been generated by simpler immigration procedures for more source markets. Visitors from Asian countries such as Japan and South Korea do not require a visa while tourists from more than 100 countries can now obtain an e-visa within three days.

The situation is more difficult, however, in terms of the German market where the Rohingya conflict has gained a lot of media attention. The number of German visitors to Myanmar slumped from nearly 40,000 in 2017 to about 29,000 in 2018. Last year it recovered slightly by 2.1%.