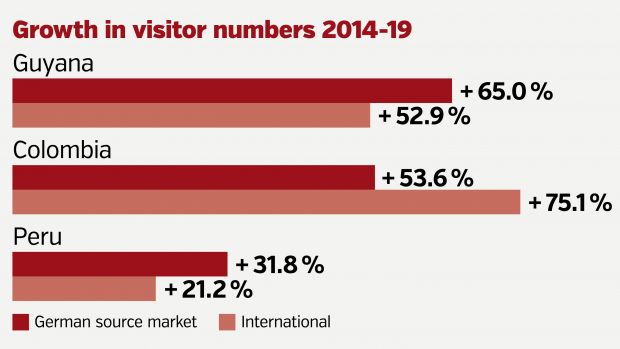 fvw
The three fastest-growing destinations in North and South America over the last five years.

The North-South divide in tourism in the Americas continued last year with moderate growth for powerhouses USA and Canada but higher increases for some destinations further south, the fvw Destination Ranking 2020 showed.

With two million visitors the USA remained by far the biggest long-haul destination for German travellers last year. But first place cannot hide the fact that the number of German visitors to the USA has effectively stagnated for the last three years in a row and remains significantly below the nearly 2.3 million arrivals registered back in 2015. Overall international visitor numbers have fluctuated in the last few years for diverse reasons.

Northern neighbour Canada has grown steadily in recent years but saw its annual increase on the German market slow significantly in 2019 like in the previous year. The country is reaching its capacity limits in some places during the peak season.

South America is not making any great leaps forward at the moment, although most destinations performed well on the German market in 2019 despite the region’s economic, political and social problems.

Colombia was again one of the winners last year with double-digit growth in German visitor numbers, reinforcing its position as number two in the 2014-19 growth table. Argentina had a strong year on the German market in 2019 with a 10% rise in visitor numbers despite its economic crisis and political turbulence.

Moreover, Peru, Chile, Bolivia and Ecuador also continued their good growth of the last few years. In contrast, Brazil stagnated at about 209,000 German visitors last year, although it remained by far the biggest single destination in South America.

In terms of overall international arrivals, some South American countries suffered from a significant fall in cross-border travel within the continent.