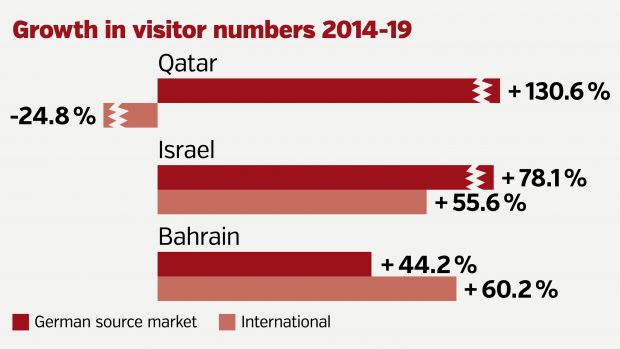 fvw
The three fastest-growing destinations in the Middle East over the last five years.

Both Israel and several Gulf destinations performed well on the German market last year, according to the fvw Destination Ranking 2020.

Flight subsidies, new routes to Tel Aviv and Eilat, and new hotels throughout the country helped Israel to attract 10% more German visitors last year, consolidating its strong growth over the previous two years. The country is the second-fastest growing destination in the Middle East over the last five years.

Growth champion on the German market both in 2019 and since 2014 is Qatar whose strong marketing is paying off with high double-digit increases. Cruises are booming and contributing significantly to the rise in international visitors.

Meanwhile, Dubai defended its status as the top regional destination for Germans last year, although arrivals fell slightly for the first time in many years. But international visitor numbers continued to rise solidly last year thanks to growth markets such as China and Russia. As host of the first World Expo in the Middle East this year, the emirate hopes to attract 25 million visitors from around the world. A new five-year visa for all nationalities should support this aim.

Jordan made an impressive comeback last year with a 30% rise in German tourists after several difficult years due to its location close to Syria. More flights to Aqaba on the Red Sea helped the recovery.

Another success story in 2019 was Bahrain which welcomed more than 100,000 Germans for the first time. With Manama as “Capital of Arab Tourism for 2020” and lower visa fees, the kingdom aims to consolidate its strong growth of recent years.

Meanwhile, Oman, the ITB partner country for 2020, hopes to return to the growth path on the German market this year. International visitor numbers soared by 21% last year. The sultanate has invested massively in its airports and is currently expanding the port of Muscat into a hub for cruise companies.

A similar policy is being followed by Ras Al Khaimah with a new cruise terminal to attract more ships and diversify from beach holidays. Russia and India have overtaken Germany as the top source market in the last few years.