Overall bookings for the ten biggest destinations dropped by as much as 14.1% last month as the Covid-19 virus spread to Europe, including holiday destinations such as Italy and a hotel on Tenerife. This was the fifth consecutive monthly decline (click on interactive graphic to see previous months’ figures).

Unsurprisingly, Tenerife South (-29.7%) saw the biggest year-on-year fall in bookings through the Amadeus reservation systems. Two other Canary Islands, Las Palmas (-21.6%) and Lanzarote (-21.5%), were dragged down as well. But Fuerteventura (+1.6%) apparently won bookings as customers switched between the Spanish Atlantic islands.

Meanwhile, Majorca also suffered heavily with a 27% slump in bookings to Palma, which was the fifth consecutive monthly double-digit decline.

Once again, it was a mixed picture for Greece last month. Demand for Crete dropped, resulting in a 17% fall in bookings to Heraklion. But Rhodes (-2.6%) and Kos (-3.5%) had relatively stable months on the German market, according to the Amadeus figures.

In terms of booking channels, travel agents (-23.7%) suffered most from the bookings decline while online sales (-5.1%) declined only moderately.

Note to readers: The figures refer to package and last-minute bookings made through Amadeus reservation systems. The top 10 destinations account for about 65% of total German holiday bookings. 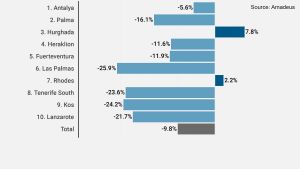