German bookings for most leading package holiday destinations started with a downturn in January, the latest monthly figures from Amadeus showed.

Overall bookings for the ten biggest destinations dropped by 9.8% last month, which was the fourth consecutive monthly decline (click on interactive graphic to see previous months’ figures). January is normally a key month for holiday bookings as Germans aim to secure their preferred dates in their favourite beach holiday hotels.

Eight leading destinations recorded weaker bookings compared to January 2019, when nine out of the top ten suffered falls, according to Amadeus’ bookings data.

The main winner in January was Hurghada with a 7.8% rise, which was its third consecutive month with higher sales on the German market. Rhodes (+2.2%) was the only other major destination to win more bookings.

Antalya dropped back last month with a 5.6% year-on-year decline in package and online bookings through Amadeus systems, although it remained the biggest single destination.

Once again, all the top Spanish destinations saw bookings decline in January, according to the Amadeus figures. Palma (-16.1%) suffered a double-digit decline for the fourth consecutive month. In the Canaries, there were double-digit falls for Fuerteventura (-11.9%), Las Palmas (-25.9%), Tenerife South (-23.6%) and Lanzarote (-21.7%).

Greece also saw weak demand (apart from Rhodes) with lower bookings for Heraklion (-11.6%) and Kos (-24.2%), according to the Amadeus figures.

In terms of booking channels, travel agents (-13%) saw weaker sales for the top destinations than OTAs (-7%).

Note to readers: Amadeus Leisure IT claims to handle the bulk of offline (travel agency) and online bookings for tour operator holidays on the German market. 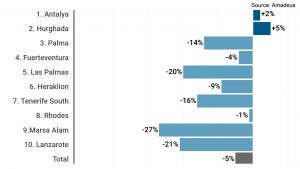