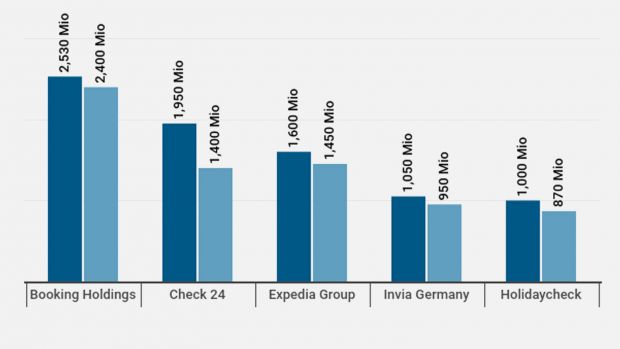 The German online travel sales market, covering bookings through portals, OTAs and tour operators, grew by 13% to €29.3 billion in 2018, according to market researchers. Online sales now account for about 43% of the total €67.9 billion German leisure travel market, putting them ahead of travel agencies with a 40% market share.

This strong growth was driven by nearly all the major players who profited with double-digit growth rates, according to a ranking of 20 leading online sales channels in the market research dossier. These companies increased their sales by 13.4% to nearly €14 billion, according to fvw estimates.

The ranking includes specialist portals for hotels and flights, holidays-focused OTAs and tour operator websites, but not online sales by airlines, Deutsche Bahn or other suppliers. Meta-searchers who link to other sites for bookings are also not included.

The clear market leader for online travel sales in Germany is accommodation portal Booking.com, with an estimated 10% increase in turnover to €2.53 billion in 2018. It profited from expanding its portfolio to include more holiday homes and private apartments.

The biggest winner last year was price comparison website Check 24 with a dramatic 39% rise in travel sales to €1.95 billion that put it into second place. The group won countless new customers thanks to massive TV advertising and controversial discount vouchers, selling holidays from about 90 different tour operators as well as through its own dynamic packaging business Aurum Tours.

In third place was Expedia, whose Germany revenues are estimated to have risen about 10% to €1.6 billion last year. The world’s largest OTA mostly sells flights to German customers but is also increasing sales of hotel accommodation (e.g. through Hotels.com) and package holidays.

Invia Germany is back on the growth path and increased its turnover by an estimated 10% to €1.045 billion. This was largely thanks to higher sales through holidays portal Ab In Den Urlaub but business was slower for flights portal Fluege.de, which is up for sale.

Among other major players, business travel specialist HRS saw sales drop back to €950 million while Edreams Odigeo (the Opodo.de parent) grew 10% to €930 million. Airbnb’s Germany revenues are estimated to have grown by a third to €650 million based on nearly 8 million customers, but Lastminute.com Group stagnated with sales of €400 million.

Among the big German tour operators, TUI was top-ranked in eighth place, with estimated online sales up by 12.5% to €900 million. DER Touristik increased online sales moderately by 5.7% to €370 million, FTI grew by 14% to €350 million, and Thomas Cook saw low growth of 4.3% to €218 million, according to the fvw dossier. 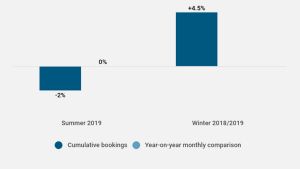 German holiday sales recover in May 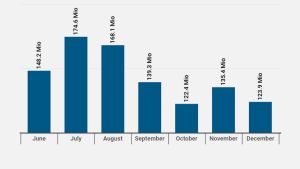 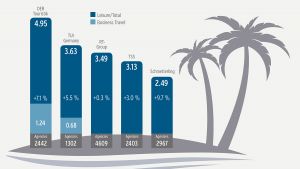