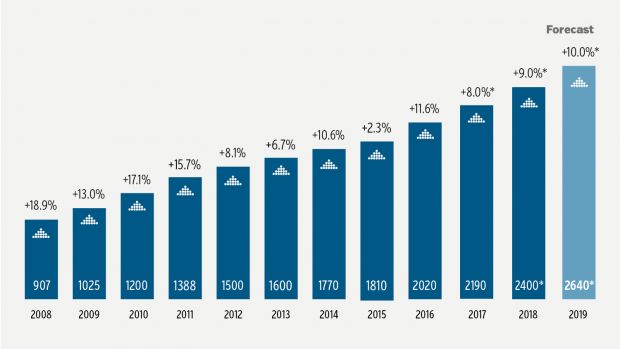 Most German cruise operators grew strongly last year but the sector is increasingly facing image problems and environmental challenges, according to the latest fvw dossier.

The two dominant players, Aida Cruises and TUI Cruises, both had successful years. Aida’s customer numbers in the three German-speaking markets increased by 4.7% to just over one million, generating an estimated 8.8% rise in turnover to €1.85 billion. The company, part of the Carnival-owned Costa Group, can look forward to further growth this year as its new flagship, the Aida Nova, went into service at the end of 2018, and the Aida Mira will arrive at the end of 2019.

TUI Cruises, a 50-50 joint venture between TUI Group and Royal Caribbean, increased its fleet, generating a 14% increase in customer numbers to 532,000 and a 18.4% rise in revenues to €1.25 billion in the DACH region. Sister company Hapag-Lloyd Cruises, which focuses on the luxury and expedition market, had a solid year with turnover up by 4.6% to €326 million and a 5.6% rise to 28,000 customers.

The strongest growth was generated by MSC, whose regional revenues went up by nearly 21% to €330 million as customer numbers grew by 15% to 230,000. European rival Costa had low growth of 4.3% to €240 million last year as customer numbers from the three markets stagnated at 208,000, the dossier showed.

Medium-sized cruise operators generally performed well in 2018. River cruises specialist Phoenix Reisen increased revenues (excluding its small package holidays business) by 4.9% to turnover of €359 million, while customer numbers increased by 5.4% to more than 167,000. Fellow river cruises specialist Arosa generated solid growth of 4.6% to revenues of €91.5 million on a slight 1% rise in customer numbers to just over 85,000. 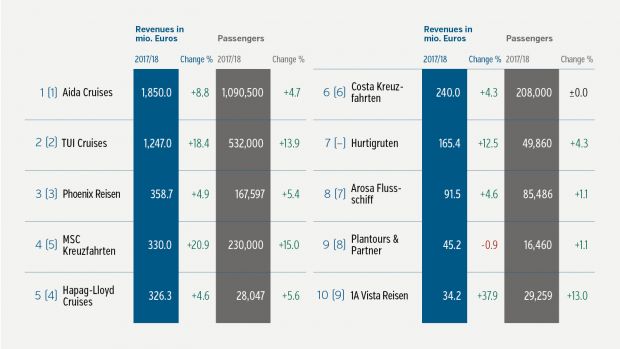 
Despite this generally positive picture, however, the cruise industry is facing several challenges as new ships continue to come on to the market. For example, packed ports have led to claims that the sector is responsible for overtourism in popular destinations such as Venice and Dubrovnik and have made it a focus of protests by residents and campaigners. This criticism is now starting to emerge in major river ports on the Danube, too.

In addition, cruise companies have been heavily criticised by environmental campaigners for doing too little too late to reduce their emissions. Some companies are investing in new technologies in response to new regulations but it will take time until a significant number of vessels have been made cleaner for the environment, according to observers. 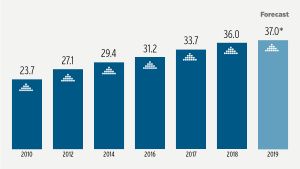 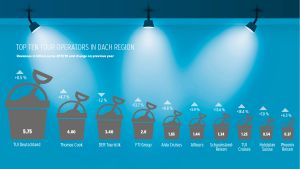 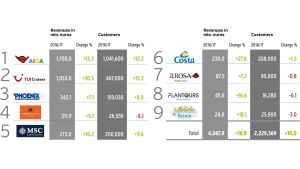 German and international cruise firms sail ahead with double-digit growth