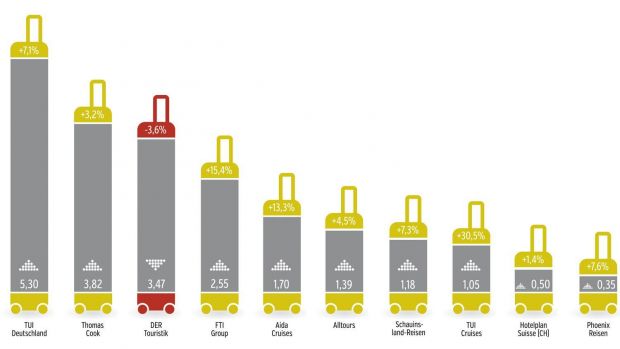 fvw
The top ten tour operators in Germany, Austria and Switzerland by revenue

For 2018, the fvw dossier has been restructured and takes into account the results of the GfK ‘mobility monitor’ which will be published by the German Travel Industry Association DRV at ITB Berlin and is exclusively available to fvw in advance. The DRV estimates the total German organised travel market at €33.7 billion last year, 8% more than the previous year, based on the findings of the GfK panel, which surveys 40,000 consumers monthly and thus also covers bookings such as coach holidays and diverse other organised trips.

The overall German travel market is estimated by GfK and DRV at €64.7 billion in 2016/17, which would be an 8.2% increase on the previous year. This includes direct bookings by consumers from suppliers such as airlines and hotels as well as through online portals, which are estimated at €31 billion last year.

The 7.4% rise in tour operator revenues in Germany last year was a much better performance than in 2016 when business stagnated due to slumping demand for Turkey and North Africa. In 2017, tour operators achieved significantly higher average prices, given that the overall number of customers increased by only 2.8% last year. This was due to a mix of factors, including healthy demand for Spain, Greece and other more expensive Mediterranean destinations as well as strong growth for cruises and other higher-priced holidays.

Good growth for top German tour operators – except for DER

The top three tour operator ranking remains unchanged, with TUI as the clear market leader ahead of Thomas Cook and DER Touristik.

With estimated revenue growth of 7.1% to €5.3 billion last year, TUI grew slightly faster than the overall market in the three German-speaking countries, and also improved its underlying profits in the region. Estimated customer numbers were up by 3% at 6.8 million. In Germany, TUI had slightly lower growth of 6.8% in revenues and 2.3% in bookings, according to the dossier.

Thomas Cook generated moderate growth of 3.2% to €3.82 billion in the DACH region, which includes Condor’s seat-only sales that are estimated at about €800 million. The tour operator business improved its profits by 29% while Condor returned to profit last year. Customer numbers are estimated to have risen by 7.9% to 6.8 million last year.

DER Touristik had a weak year and saw turnover drop by 3.6% to €3.47 billion, following serious IT reservation system problems at the start of the year. The group’s customer numbers dropped by 8.3% to 6.3 million in the region.

In contrast, FTI Group grew rapidly with a 15.4% increase in revenues to €2.55 billion, with customer numbers up by 9% to 4.25 million. The group profited from strong Egypt bookings and was notably the only major tour operator with higher Turkey bookings last year.

The other two large tour operators, Alltours and Schauinsland-Reisen, both had better years in 2017 than the year before. Alltours, which suffered a double-digit revenue slump in 2016, recovered with a solid 4.5% rise in revenues to nearly €1.4 billion. Schauinsland, after flat revenues last year, grew strongly with a 7.3% increase to nearly €1.2 billion.

The two largest German cruise operators both generated strong growth last year thanks to adding new ships and general strong demand for ocean cruises. Aida Cruises increased revenues by 13.3% to €1.7 billion while TUI Cruises achieved growth of as much as 30% last year to top the billion-euro mark.

German tour operators are optimistic about business in the current 2017/18 year after strong bookings in December and January for summer 2018 holidays. Growth is being driven by continued high demand for Spain and Greece, strong comebacks for Turkey, Egypt and Tunisia, and cruise bookings.