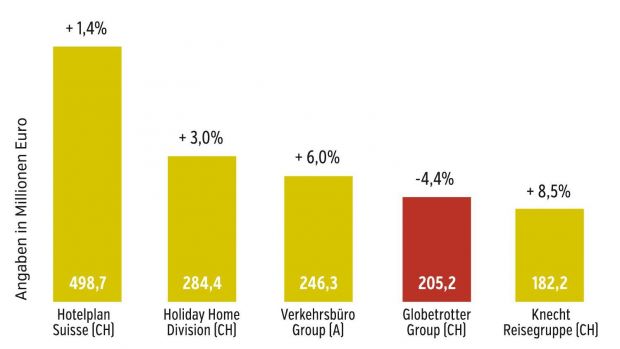 The tour operator markets in Austria and Switzerland are much smaller than in Germany, mostly due to the big differences in population. Austria, with 8.7 million residents, and Switzerland, with 8.4 million, are each barely more than a tenth of the size of Germany, which has a population of 82.7 million. But geographical and linguistic factors also play a big role in the two Alpine markets.

In Austria, the three most popular destinations - Italy, Germany and Croatia – can all be easily reached by car and are generally booked individually. As a result, tour operators have a much lower share of the overall travel market than in Germany.

German groups expand across the Alps

All leading German tour operators have expanded into the Austrian and Swiss markets over the last decade or earlier, and now mostly have solid positions in the two countries. According to the fvw dossier, TUI generated estimated revenues of about €600 million in the two countries combined in 2016/17, DER Touristik nearly €770 million and Thomas Cook, which is only active in Austria, about €200 million.

Hotelplan leads Swiss market ahead of DER and TUI

The Swiss tour operator market generated only low growth of about 2% to the equivalent of €2.7 billion in 2016/17, according to experts.

Market leader and the largest Swiss-owned tour operator is the Hotelplan Group. Its main tour operator Hotelplan Switzerland increased revenues by only 1.4% to the equivalent of €500 million last year while customer numbers rose slightly to 523,000. However, it improved profits significantly. The group’s Holiday Home Division, including Interhome and Germany-based Interchalet, increased turnover by 3% to €284 million, with customer numbers up by 1.6% to 1.48 million.

Number two in Switzerland is DER Touristik Suisse, based around the former market leader Kuoni which was acquired in 2015, followed by TUI Suisse, which has been in third place for many years. The next-largest Swiss companies are Globetrotter Group, an alliance of small specialists, and long-haul travel specialist Knecht Reisen. FTI, Schauinsland and Alltours have only low revenues in Switzerland, while Thomas Cook cooperates with Hotelplan.

The organised travel market in Austria grew about 5% last year to revenues of some €2 billion, according to experts. The market is dominated by German tour operators who have expanded into the country since the introduction of the euro more than a decade ago and offer package holidays with departures from Austria airports.

Market leader is TUI Austria, followed by the biggest Austrian player Verkehrsbüro, DER Touristik Austria (including ITS Billa), Thomas Cook, FTI, Schauinsland and Alltours. The Verkehrsbüro Group is listed in the fvw dossier with tour operator revenues of €246 million (+6%) generated through its Eurotours and Ruefa Reisen businesses.