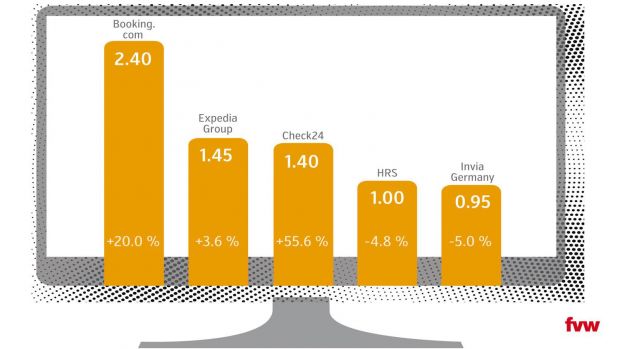 fvw
The top five travel sales portals in Germany, according to the fvw dossier

Online travel agencies (OTAs) are catching up on traditional travel agents in Germany after fast growth last year, according to a new fvw dossier.

But OTAs are steadily winning market share. Online channels combined accounted for 40% of the overall German organised travel market of €64.7 billion with sales of nearly €26 billion, compared to a 35% share three years ago.

A major role was played by the 20 portals listed in the fvw dossier which increased their sales by 12.7% to more than €12.3 billion in 2017. The bulk of the figures in the top 20 ranking are based on estimates by researchers and experts.

Booking.com, with an estimated 20% sales rise to €2.4 billion, remained the clear market leader, ahead of Expedia, which generated a solid 3.6% increase to €1.45 billion with a mix of tour operator products, dynamic packages and also holiday homes through new acquisition Homeaway (Fewo-Direkt).

The biggest jump, however, was made by price comparison portal Check24, which expanded its travel business substantially and increased sales by 55.6% to €1.4 billion. The portal is seen as one of the main winners from the Unister insolvency in 2016. The former market leader, best known through portals such as Ab-In-Den-Urlaub and Fluege.de, has been re-named as Invia Germany following its sale at the start of 2017. It largely stabilised sales last year after a heavy slump in 2016.

The other player in the top five, HRS, is a special case with its focus on hotel reservations for business travellers. Its sales weakened slightly last year due to falling private bookings, according to experts.

Other leading portals all grew healthily, according to the dossier. Holidaycheck increased sales by 13% to €870 million, resulting in net turnover up to 13% to €122 million. Opodo parent company Edreams Odigeo grew 10% to €845 million, and TUI Germany increased online sales (including through TUIfly.com) by 6.7% to €800 million.