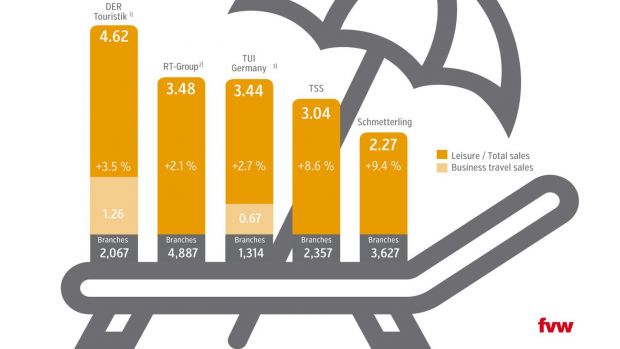 fvw
The five largest German travel sales organisations in 2017, according to the fvw dossier

Travel agents increased their combined sales by 4.6% to €26.4 billion last year, according to the annual fvw ‘German travel sales’ dossier based on company figures and calculations by the German Travel Industry Association (DRV). This compensated for a 2.4% decline in 2016 and took revenues above 2015 levels.

Although the 4.6% sales growth appears good, two factors need to be taken into account. The German tour operator market, which accounts for a large proportion of travel agency sales, grew by a higher 8% to €33.7 billion last year. Moreover, online travel agencies (OTAs) and tour operator websites increased revenues by as much as 14%, according to the dossier. Traditional travel agencies are thus continuing to lose market share in a growing market.

There were few changes in the top five ranking, with the top four retaining their positions. DER Touristik remained Germany’s largest travel agency chain, increasing sales by 3.5% to €4.62 billion. The RT Group and TUI Germany both generated solid growth of 2.1% and 2.7% respectively. The TSS cooperation network grew strongly with an 8.6% increase in revenues.

Looser cooperation networks grew more strongly than centrally-managed chains and franchise organisations last year, the fvw dossier found. The cooperation groups increased sales revenues by 5.1% to €12.1 billion while chains and franchises grew by 3.5% to €12.5 billion. These organisations accounted for a combined 93% of total travel agency sales.