USA loses and Canada wins in North and South America 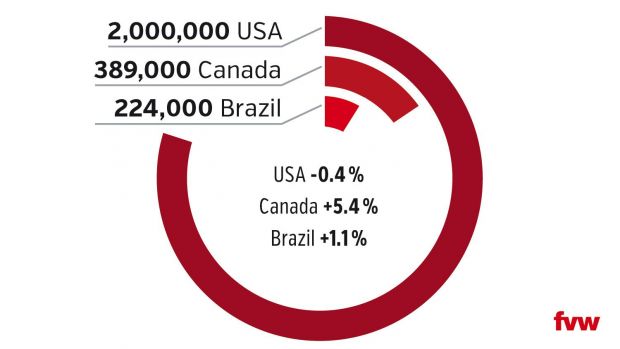 German visitor numbers to the USA dropped slightly in 2017 but neighbouring Canada was among winners in the region, according to the newly-published fvw Destination Ranking 2018.

Donald Trump alone is not to blame for the fall in international visitor figures to the USA. “The arrival figures have been declining since 2015,” states Roger Dow, President of the US Travel Association. The travel industry has been much more impacted by the strong dollar, which discouraged travellers from Europe. In addition, a role was played by the fact that in the last few months the USA was the site of natural catastrophes, such as the forest fires in California, and of attacks such as the one in Las Vegas. In other source markets, the policy of the new government had immediate consequences. “If people from certain countries don’t know if they are even allowed to come or will be more strictly controlled at immigration, then that affects travel decision-making,” says Dow.

The German market appears relatively stable. Based on the figures up to August, a slight drop to about two million guests appears likely for 2017. This would still be the fourth-best result ever, though.

Slowdown in slump of German visitor numbers to the USA

To recall: after the attacks of September 11, 2001, and the economic and financial crises, it took more than a decade to beat the former records from the end of 1990s. In 2014, the two million visitor barrier was broken for the first time; and in 2015 a new record was set with nearly 2.3 million German visitors. Under the effects of the weak euro, which made travel spending in the USA significantly more expensive, there was even a double-digit (-10.4 per cent) fall in 2016. With only a slight decline in 2017, an end of the downturn therefore looks in sight. In addition, the exchange rate situation has calmed down. In the first quarter, the euro has risen significantly to over $1.20. This will also have an effect on tour operator package prices in the medium-term. They are relatively relaxed about the situation and expect for 2018 at least a stable year for the USA.

In comparison with other source markets, Germany – which, by the way, has the highest proportion of business travellers among visitor numbers at 24 per cent – has performed relatively well. Among the top ten source markets for the USA, only Canada, South Korea and France have reported growth; all others are showing declines, and quite substantial in some cases. Overall, the USA is therefore likely to close 2017 with another decline, after the slight fall in the previous year, and drop significantly below the level of 75 million visitors.

High-volume cities such as New York and Los Angeles have reported record figures despite the weaker foreign visitor numbers. But Chris Heywood, from the marketing organisation NYC & Co, points out that on average a foreign tourist spends four times more than a domestic traveller.

The consequences of the downturn are serious. In the USA as a whole, tourism industry revenues declined by as much as 3.3 per cent to US$ 4.6 billion up to the end of November. “If as a country we want to even out the trade deficit with abroad, then we need foreign tourists,” emphasises US Travel chief Dow. At present, the US travel industry is setting up a lobby group that would press the government to support incoming tourism more.

Canada continues its upswing in its anniversary year

While the interest of Germans in the USA is stagnating at present, Canada has been shining with unbroken growth for years. In 2013 a total of 311,000 German guests were counted in the country. In 2017 it was already about 389,000. This was growth of 25 per cent. However, in contrast to the USA, the maple-tree country still remains well below the previous record of more than 450,000 German visitors in 1996.

In 2017, the increase compared to the previous 12 months lay at 5.4 per cent. Canada benefitted from several aces during the year. The 150th anniversary of the country’s foundation generated media coverage with countless events and presented all visitors with free entry to the national parks. The low Canadian dollar and moderate flight prices thanks to a substantial rise in capacity compensated for the former price disadvantage compared to the USA.

And in contrast to its large neighbour, Canada’s government under the young charismatic prime minister Trudeau scored sympathy points around the world. The total number of international visitors also rose by more than four per cent to 20.8 million arrivals in 2017. “We have a strong tailwind,” says a delighted David Goldstein, head of Destination Canada, “and we are profiting from the positive image that the international travelling public has of our country.”

For Canada’s tourism officials, this upturn is far from over. For Germany, Destination Canada has set the ambitious target of half a million guests in 2020. This would be annual growth of more than 8 per cent. This is no easy task for the local Destination Canada team under the new management of Barbara Ackermann, who in the spring replaces Germany chief Karl-Heinz Limberg who has served in the post for over 25 years.

A lot will depend on whether Canada can succeed in finding solutions for the already emerging bottlenecks in hotspots such as Vancouver, Banff and Jasper. These popular destinations offer hardly any scope for expanding capacity. Therefore it is more a question of extending the relatively short season. Hoteliers, attractions and other suppliers will have to work together and keep their businesses open longer in the spring and autumn. The fleets of the motorhome rental companies also quickly reach their limits in the main season. Whoever wants to secure a vehicle is well-advised to book early.

Apart from lengthening the season, Destination Canada is also promoting regions that are visited less often. They are convinced that the Atlantic and prairie provinces offer plenty of potential. The next challenge will be to get holidaymakers away from the prejudice of ‘Canada = cold’ and to excite them for the off-season and niche destinations. The digital marketing strategy started in 2015 is designed to achieve this. It is not uncontroversial among tour operators but appears to be working so far.

Chile, Ecuador and Colombia: more and more South American countries which do not count among the continent’s major destinations are becoming popular among German travellers. While visitor numbers to traditionally popular destinations such as Brazil and Peru have declined compared to the previous year, the other destinations are shining. Colombia, for example, is recovering above all because the political situation has stabilised so much that tourists no longer have to fear for their personal safety. As a result, the number of arrivals from Germany has risen since 2013 from 44,000 to 70,500.

Chile and Ecuador can also be satisfied with significant growth. With 78,300 visitors (+6 per cent), Chile is now the most popular destination in South America behind Brazil and Peru. In Ecuador, visited by 33,500 German tourists in 2017, further growth can be expected in 2018, especially as Condor will start twice-weekly flights to the capital, Quito, in the winter season. The country attracts visitors above all with the famous Galapagos Islands with their unique wildlife.

Brazil, in contrast, suffered in 2016 – at least in the German source market – from the negative consequences of the Olympic Games in Rio de Janeiro. The travel industry has observed for several years how in Olympic years the locations of the games are avoided rather than visited. In 2012 London had much lower demand than in the years before and after. This effect is seen as one of the reasons for the decline in visitor numbers from Germany with a fall of nearly 17 per cent to less than 222,000 that year, although total numbers increased slightly to 6.6 million.

In Brazil, however, domestic tourism plays a more important role than international visitors. The World Travel and Tourism Council (WTTC), for example, has calculated that only 6.5 per cent of the country’s tourism revenues are generated from abroad.