Southern Africa stays on the growth trail as Kenya recovers 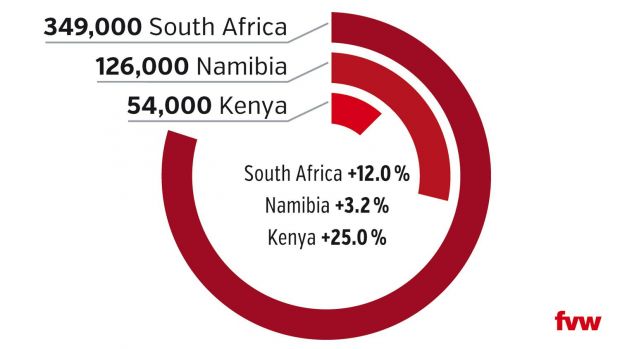 The Big Five are still a tourism magnet. The traditional safari destinations south of the Sahara welcomed significantly more tourists in 2017 than in the previous 12 months, according to the newly-published fvw Destination Ranking 2018.

One sign of the further growth in Africa tourism is that Studiosus, the cultural holidays specialist, sold 42 per cent more trips to South Africa, Namibia and Botswana in 2016/17 than the season before. In the last few years Namibia has overtaken Kenya on the German source market as the second-largest destination in southern Africa (referring to all countries south of the Sahara). The number of visitors increased as much as nearly 60 per cent in the last five years.

Animal watching and experiencing nature are the driving factors for rising visitor figures for Botswana. The most recent official numbers show that with about 25,000 visitors in 2015, Germans made up the second-largest group of tourists from outside the continent. The top source market was the USA with some 37,000 arrivals.

It is difficult to judge exactly whether these trends will continue in 2018. The ongoing drought period in South Africa, which has already threatened the water supply to the Cape Town metropolitan area, has made headlines since the middle of January. This will negatively influence the travel decisions of many people interested in the country.

In addition, prices are rising again in South Africa parallel to the tourism boom and the general economic development of recent years. According to calculations by The Economist magazine, the purchasing power of the South African rand has risen steadily in the last four years. However, it remains significantly lower than the comparable value of the US dollar, leading the magazine’s experts to describe South Africa as still being “extremely inexpensive”.

Kenya’s neighbour Tanzania has not published any figures for last year, either international or from Germany – and was therefore not included in the fvw Destination Ranking. In 2015, Tanzania had similar numbers as Kenya with slightly over one million international arrivals. The tourism product of the two neighbouring countries is also comparable. While Kenya promotes the beaches around Mombasa, Tanzania offers the island of Zanzibar, which is in the programme of all major tour operators and counts about 30,000 German guests per year. In addition, safari tours and treks on Mount Kilimanjaro remain top travel activities in both destinations.

Behind these big five destinations in southern Africa lie three extremely different destinations which admittedly generate relatively low volumes on the German market but have nevertheless secured a fixed place in tour operator programmes. This includes above all Ethiopia with its various world cultural heritage sites, which has attracted no fewer than 25,000 German tourists a year in the last four years. The total number of arrivals, which includes business trips and VFR travel, however, adds up to more than one million last year.

Uganda and Gambia play only niche roles in tourism from Germany. The first is visited above all by nature and trekking tourists who are mostly interested in encountering the rare mountain gorillas. Gambia, in contrast, presents itself as an exotic beach destination. The smallest country in Africa offers excellent beach hotels which can be found, for example, in the holiday brochures of FTI and Thomas Cook.