Mediterranean destinations are the season’s winners 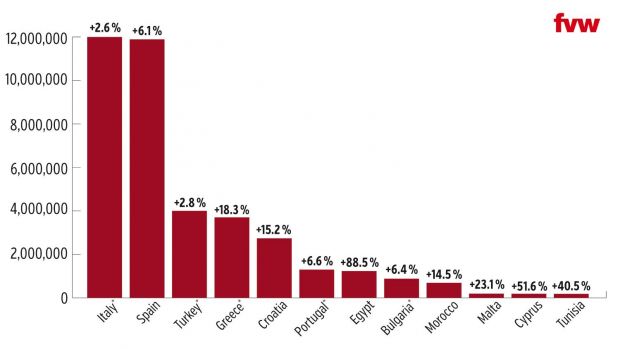 Most destinations around the Mediterranean are enjoying their success in 2017, according to the newly-published fvw Destination Ranking.

Spain has grown once again, both in the German source market as well as among international visitors. After a slight drop in 2015 when interest from Germany weakened slightly by 1.2 per cent, the country performed much better in the following two years. In 2017, nearly 11.9 million Germans headed for Spain, which was a rise of 6.1 per cent compared to the previous year. A glance at the long-term trend reveals an increase in the number of visitors of more than one fifth since 2013. However, this growth from Germany remained moderate in international comparison. Overall, the total number of tourists in Spain increased by 35 per cent to 81.8 million over the same period of time. Most Germans organise their Spain trip themselves. More package holidaymakers than individual travellers were counted only in the months of September and October.

Italy, the second top Mediterranean destination for German holidaymakers, is even more strongly characterised by individual tourism than Spain. The majority of the estimated 12 million German visitors make their own travel arrangements. Only in the far south have package holiday destinations established themselves and been prominently presented above all in FTI’s programme. But not only. Dertour recently added 70 more hotels in southern Italy to its programme.

Nevertheless, volumes from the German market appear to have stabilised at a high level after a boost seen in 2016 (+7.7 per cent). Total international numbers grew strongly in 2017 with an increase of 5.2 per cent. The Italian tourism association Assoturismo believes that the figures can rise even higher in 2018. Assoturismo president Vittorio Messina sees a further increase of 5 per cent as possible from last year’s figure of nearly 60 million international visitors. At the same time, the top official is urging more commitment from politicians. “We need a tourism ministry again,” he says. 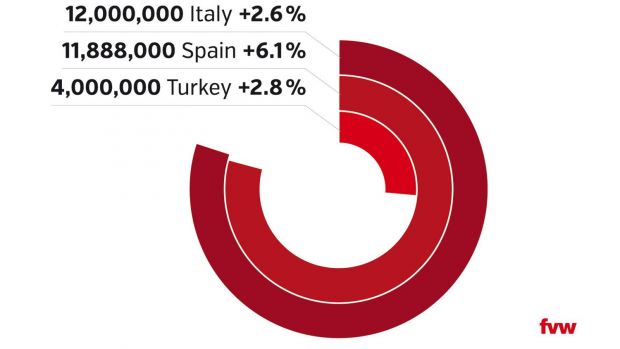 fvw
Total German visitor numbers to Spain, Italy and Turkey in 2017, their relative size and percentage changes compared to 2016.

Greece and Turkey: blessings for one, woes for the other

The influence of politics on visitor flows can be observed very clearly in the development of tourism in Greece and Turkey. For Turkey, where the holiday product is held in high esteem and has barely changed, the policies of the government are blamed for the dramatic drop in demand. The country experienced its biggest slump in 2016 as the number of German tourists fell by 30 per cent to 3.9 million. A slight recovery appears to have taken place in 2017, as officials have estimated about four million visitors from Germany. “The German tourism industry needs this destination. With its excellent value for money, Turkey is virtually irreplaceable,” emphasises DRV president Norbert Fiebig.

Greece, whose hotel sector was hit by international politics in recent years, seems to have profited in particular from the exodus of German tourists from Turkey. Whereas visitor numbers dropped dramatically during the financial crisis, today hoteliers are seeing good growth figures in their books. The German market grew by 18 per cent in 2017 compared to 2016. However, Greek hoteliers and also major tour operators used the tough crisis years to improve their products and value for money. In addition, the number and scale of strikes that previously brought the country to a halt have fallen significantly since the beginning of the decade.

Croatia, Portugal and Bulgaria catch up

From a summer destination to an all-year destination: that is the challenge posed by Croatian tourism minister Gari Cappelli to the tourism industry. The country on the Adriatic coast has developed into an international trend destination. The number of foreign visitors increased by 43 per cent between 2013 and 2017 to 16.4 million arrivals. Germany remains the top source market with more than 2.7 million arrivals. Further growth can be expected this year as all major tour operators have expanded their Croatia programmes. Minister Cappelli already sees “the good results of the early and late seasons” as an important reason for this increase. The worldwide interest in the TV blockbuster Game of Thrones may well have played into the hands of tourism officials. At least, the visitor numbers to Dubrovnik, which plays the role of the fictional city of King’s Landing in the series, have quadrupled since the fantasy saga was broadcast.

With Portugal and Bulgaria, which each generated about six per cent growth last year, two other European countries can count themselves among the winners of the Turkey crisis on the German source market. Portugal, which welcomed 1.3 million German visitors in 2017, has recorded a continuous upward trend for more than five years. In contrast, Bulgaria has repeatedly had to cope with strong fluctuations. A fall of nearly 13 per cent in both 2014 and 2015 was followed by a 33 per cent rise in 2016. Moderate growth of about 6 per cent followed in 2017. In 2018, tour operators are increasingly selling the Black Sea country as an inexpensive family destination. TUI, for example, has increased capacity in this area by a quarter.

The trends for the two island states of Malta and Cyprus are more difficult to assess. In 2017, Cyprus, with 188,000 German visitors, lay at nearly the same level as Malta (193,000). However, the special effects of the role of Paphos as European Cultural Capital and the related publicity should be taken into account. This year it is the turn of Malta’s capital, Valletta, to be the Cultural Capital.

How long will the upward trend in North Africa’s holiday countries continue?

There is a collective sigh of relief as far as business with the North African holiday destinations is concerned. Egypt, Morocco and Tunisia ended last year with substantial growth in some cases. Egypt outpaced all other major destinations with growth of 88 per cent to 1.23 million German holidaymakers and celebrated a strong comeback. Tunisia, the birthplace of the “Arab Spring”, is recovering gradually. There was an increase of 40 per cent to 181,000 German visitors last year. But the country is still a long way away from its former levels, such as 2014 when 425,000 German tourists came. But at least TUI has expanded its summer programme with an additional 25,000 seats. The situation is very different for Morocco which, with an increase of 14.5 per cent, more than made up for the slight drop in 2016.