by Paul Needham
Wednesday, May 23, 2018
While German visitor numbers to most destinations around the world have risen significantly in recent years, the biggest destination in the Far East is stagnating, according to the newly-published fvw Destination Ranking 2018.
E-Mail Drucken 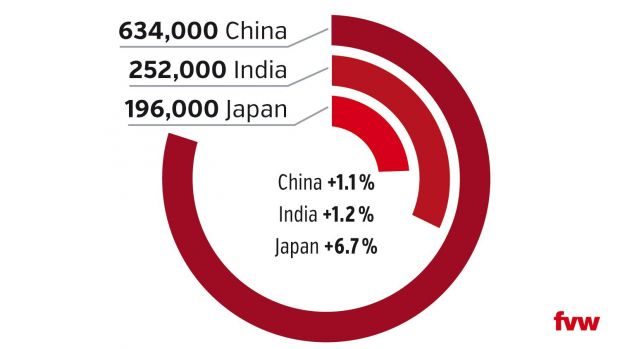 fvw
China is the largest Far East destination for German travellers but growing slowly while Japan is catching up on India. The graphic shows total German visitor numbers last year and percentage changes compared to 2016.

With around 634,000 arrivals, China admittedly welcomed more Germans in 2017 than in 2016. This was a rise of as much as 11.1 per cent. But in previous years there were often downturns. The reason lies less in declining interest from tourists than in the decline of business travel. In the last few years, the Chinese government has significantly tightened up on the requirements for the employment of foreigners in the approximately 5,200 German companies that have a branch in the country. As a result, the travel volume in this field has fallen. Germany and Europe only play a minor role as source markets for China. Out of the 58 million foreign visitors, about 43 million come from neighbouring and nearby states such as Vietnam, Myanmar and Laos as well as South Korea. Travellers from Taiwan and Hong Kong are treated as domestic visitors anyway and are counted separately.

Many of the more than 250,000 Germans who visited India in 2017 did so for business purposes, as well. Tour operator figures, however, also show growth in the number of holidaymakers. The image of the country has improved again, according to industry sources.

The same applies for Sri Lanka. The positive trend has continued there for the last five years, in the view of tourism companies. Since 2013, the number of international visitors has increased by 66 per cent. On the German market, however, the country had to live with a drop of 2.3 per cent in 2017 after double-digit growth rates every year in the years from 2013 onwards. Moreover, further improvements in the tourism infrastructure are being planned and carried out throughout the country. Until 2009, Sri Lanka was affected by a civil war between Tamils and Singhalese. Moreover, the tsunami of 26 December 2004 inflicted serious damage.

In Japan, the weakness of the yen is among the reasons for the strong increase in visitor numbers from Germany. The struggling currency has made holidays in the high-price destination much more affordable than 10 years ago. Even though business travellers remain the solid bedrock of travel to Japan, tourist are catching up. Since 2013, the number of arrivals has increased by nearly 80 per cent to about 196,000 in 2017. The total number of arrivals in Japan has more than doubled in the same period of time to as many as 28.7 million. The reason is the dramatic rise in travel from China. It is unclear whether the growth from Germany will continue in 2018. At the start of this year, business newspaper Handelsblatt predicted an upturn for the yen this year in a comparison of currencies. An increase of 16 per cent is a possibility.

Hong Kong can also present solid tourism figures. Nearly 160,000 overnight guests from Germany stayed in the city last year, nearly as many as in 2016. The Chinese Special Economic Zone has thus recovered from a drop in the years from 2013 to 2015. Overall international demand has also stabilised after a decline in the three previous years.

In 2017, there was a 5 per cent rise to nearly 27.9 million visitors. A role in the temporary downturn could have been played by the protests against the Chinese central government that first emerged in 2014. The demonstrators brought parts of the city to a halt for days. Travellers from mainland China represent the overwhelming majority of visitors.

No clear forecast for South Korea

South Korea has unwillingly landed in the middle of the mutual demonstrations of power between the USA and North Korea. The country had actually hoped for a positive effect on international tourism in 2018 from the Olympic Winter Games in Pyeongchang, even though this effect disappeared quickly in many Olympic host cities in recent times.

Demand from Germany was apparently little affected by this situation last year. Although the country is mostly visited by business travellers, the arrivals figure of nearly 110,000 remained stable, with a slight drop of 0.4 per cent. In contrast, South Korea suffered a slump of nearly 23 per cent in overall visitor figures. Like in most countries in this region of Asia, the largest share of visitors comes from China, which is now the biggest tourism source market in the world.