Growth for the Caribbean but Central America stagnates on German market 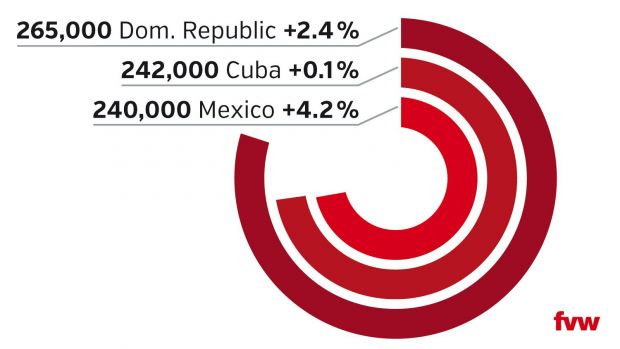 fvw
The Dominican Republic is the top Caribbean destination for German tourists but Mexico is catching up on Cuba. The graphic shows total German visitor numbers last year and percentage changes compared to 2016.

The Caribbean remains a top-seller among long-haul destinations and the German tourism industry is expecting further growth for the region this year, according to the newly-published fvw Destination Ranking 2018.

Thomas Cook, for example, points to good business at the turn of the year 2017/18 when the Dominican Republic, Thailand, Cuba and Mexico were its four best-booked intercontinental destinations. The World Tourism Organization also refers to growth for the Caribbean in its initial summary of last year.

The Dominican Republic was once again the most popular Caribbean destination for Germans in 2017. About 265,000 arrivals were counted, which was an increase of 2.4 per cent compared to the previous year. The country’s bookings curve has been pointing upwards for years. The number of visitors has increased by 24 per cent since 2013.

The most important reason for this growth is the continuous improvement in the hotel infrastructure, where the big Spanish hotel chains such as Meliá play a major role. At present, construction of 15,000 new hotel rooms is being planned. The country currently possesses more than 80,000 rooms. This means a wide choice of holiday resorts for different target groups can be offered. Sporting and active holidaymakers as well as families and luxury travellers can all find a suitable hotel in the country.

The offering is completed by a large number of leisure flights for a long-haul destination. This summer alone there are five new flights with Eurowings from Munich and Düsseldorf to Punta Cana as well as from Munich and Cologne/Bonn to Puerto Plata. Furthermore, the country’s tourist board also offers professional support both for consumers and for B2B activities. In 2018, for example, the team from the Frankfurt office will be present at all major travel fairs from Stuttgart, Hamburg and Munich to ITB Berlin. This year, tourist office chief Petra Cruz wants to target golf holidaymakers in particular and to develop the MICE sector.

Times are changing on the biggest island in the Caribbean. Since the US sanctions against Cuba were relaxed, more and more US Americans have populated the beaches of Varadero, Cayo Coco or Guardalavaca. In 2017, a total of 620,000 US tourists were counted, which was a rise of 217 per cent compared to the previous year. The USA now makes up the second-largest source of visitors behind Canada. This figure excludes exiled Cubans who visited friends and relatives. There was also high growth from Russia. The figure of about 100,000 visitors represented an increase of 68 per cent on the previous year.

The German market, on the other hand, has lost ground somewhat. In 2017, some 242,000 tourists from Germany were recorded, nearly the same figure as the year before. In contrast, the visitor figures between 2013 and 2016 all showed clear double-digit growth, with as much as 38 per cent in 2016. In 2017, though, Cuba was severely impacted by Hurricane Irma. Thomas Cook alone flew out 4,200 customers. In the meantime, however, the damage has been repaired and many hotels are better than before, according to Roland Junker, the tour operator’s senior product manager for the Caribbean and Latin America, and a big Cuba fan. Moreover, flight connections have been expanded for the winter, with Azur Air heading to Cuba alongside Eurowings. For its part, Condor already serves the island comprehensively with 12 weekly flights to Havana, Varadero and Holguin.

With 54 per cent growth since 2013 and 37 million foreign overnight visitors, Mexico is one of the absolute winners in international tourism. With a 9 per cent contribution to GDP, tourism is one of the country’s most important sources of revenues. “And an important employer,” adds tourism minister Enrique de la Madrid. Nine million people are employed in the industry, which apart from holidaymakers also serves more than 55 million day-trippers.

The figures from Germany are good, as well. The ministry counted 240,000 arrivals in 2017, a rise of 4.2 per cent compared to the year before. One interesting aspect is that the German foreign ministry specifically advises against travelling to some parts of the country. The federal states in question, however, lie on the Pacific Coast or in the north of the country on the border with Texas, and are therefore a long way away from the popular holiday regions such as the Riviera Maya.

It looks certain that Mexico will perform well again in 2018 despite plenty of bad news from the country, such as earthquakes, drug wars and a high murder rate. An important role will be played with the expansion of the tourism offering. TUI is paving the way with the newly-opened Riu Dunamar and other hotels will follow. Even the youth travel specialist Ruf-Jugendreisen is offering for the first time a trip to Cancún for pupils who have completed their Abitur final school exams. Moreover, the destination remains well-served by flights. Eurowings has announced it will fly to Cancún all year round in future.

Eco-tourism as brand in Costa Rica

No country around the world has made eco-tourism into its core brand so strongly as Costa Rica – and successfully. From 2013 to 2014 the country increased visitor figures from the German source market from 51,000 to 64,000. Since then growth has flattened off but demand remains at a steady high level. Costa Rica’s good reputation as the model country of eco-tourism is based on the 29 national parks just as much as on the development of particularly nature-friendly offerings that regularly win relevant awards such as the EcoTrophea. Among the characteristics of Costa Rica, which bears the image of ‘the Switzerland of Central America’, are the fact that it abolished its military forces in 1948, is a stable democracy and, in contrast to other countries in the region, has remained spared from civil war, internal or external conflicts.

A Europe holiday in the Caribbean. Curaçao is officially a constituent country within the Netherlands. As a result, every third foreign tourist comes from there. Germany contributes 22,000 visitors. The figure is slightly lower than for 2016 due to Hurricane Irma. Tourism officials are hoping for a recovery in 2018, especially as demand had continually increased in the years before. One condition for this, however, will be that the island – together with other destinations in the Lesser Antilles – survives the hurricane season better than in 2017 when some damage was caused.

Jamaica, on the other hand, experienced a real boom in 2017. Was tourism was boosted by the lengthy political discussions in Germany about the possible creation of a ‘Jamaica’ coalition government (named after the colours of the three potential coalition parties)? Only comedians believe this. But it is a fact that the number of German visitors soared to nearly 30,000 last year from slightly over 20,000 in 2016. The tourist office in Germany took advantage of the political discussions with cool adverts such as “Christian says: it’s a long way to Jamaica.” To which a reggae musician replies: “No, man, just one one-stop-flight.” With more direct flights from Germany this year, the Jamaican officials are expecting about 40,000 German visitors in 2018.

In contrast, Panama appears to have its years of rapid growth behind it. Between 2012 and 2014 the number of tourists from Germany increased at a double-digit rate. The diverse countryside with the Pacific and Caribbean coasts as well as an interior covered in rainforest attracted more and more visitors. Since then demand has stagnated or declined slightly. But the most prosperous country in the region, with its revenues from the Panama Canal and the free trade zone, is economically hardly dependent on tourism anyway.