Growth for Germany and all neighbouring countries 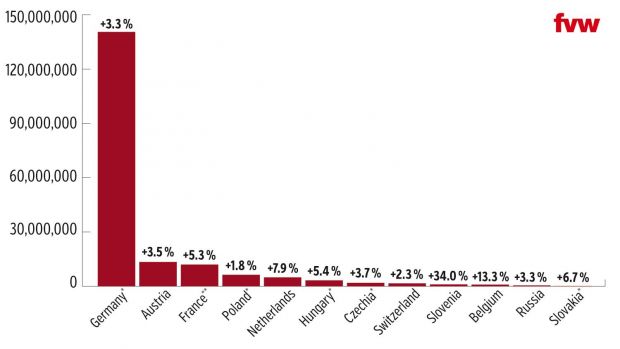 Countries in Central Europe remain popular with German holidaymakers, according to the newly-published fvw Destination Ranking 2018.

Germany remains the destination that is most visited by Germans by far. The proportion of domestic trips out of the total number of holidays barely changes from year to year. Just like 10 years ago, every third holiday trip in 2017 was taken to a destination within the country. “It is extremely likely that Germany will again be the most popular travel destination for Germans in the coming 12 months,” says Ulrich Reinhardt, study leader at the BAT Foundation for Future Issues, who researches these figures every year.

The annual Tourism Analysis study also found Germans’ desire to travel is higher than at any time in the last 10 years. Nearly 60 per cent went on a holiday of more than five days in 2017. For holiday destinations between Flensburg and Oberammergau this meant the eighth record year in a row. Put in figures: accommodation providers in Germany registered more than 140 million arrivals by German guests in 2017, which was about 3 per cent more than in the previous 12 months. Bavaria welcomed the most visitors, followed by North Rhine-Westphalia, Baden-Württemberg, Lower Saxony and Hessen. While most federal states achieved growth, Mecklenburg-Vorpommern registered a slight downturn in the number of guests.

The number of international arrivals, which increased by 5 per cent, grew even more strongly than the number of domestic trips. The most important source markets for tourism to Germany are the Netherlands, ahead of Switzerland and the USA. There was particularly strong growth from China, with more than 14 per cent. With nearly 1.5 million visitors, the country has now passed Spain and Belgium, measured in the number of arrivals. There was also double-digit growth from India, Taiwan and South Korea.

Austria with record numbers from Germany

With over 13.4 million arrivals, an increase of 3.5 per cent compared to 2016, Austria is more popular than ever before among German travellers. The importance of German holidaymakers for the neighbouring country is shown by glancing at the next biggest source markets. Number two after the Germans are the Dutch with 1.9 million arrivals, followed by the Swiss with 1.5 million guests.

In order to further drive demand from Germany, the Austrian Tourist Board is focusing on “presenting holidays in Austria as an undisturbed, typically local lifestyle feeling and a yearned-after world that contrasts with everyday life”, in the words of a strategy paper. “Unique nature experiences, individual activities and deceleration offers as well as cultural highlights” will be given priority. Another interesting fact is that German visitors are spread equally between the summer and winter half-years.

French tourist officials would also like to have such a spread of German tourists throughout the year – or at least more visitors in the off-season. That is why the tourist board Atout France launched amongst other measures the “Paris Brrr la la” campaign to attract more visitors in the cold months of the year. In 2018 Atout France will again spend about 5.4 million euros on advertising in the strong source markets Germany, Great Britain and the Netherlands. They want to appeal to people’s feelings with the claim #FEEL. “France should not become a destination for the ‘bucket list’,” the organisation wrote. German interest in visiting its neighbour fluctuates. 2017 was a good year with a 5 per cent increase to about 12 million visitors from Germany. But there had been downturns before then. 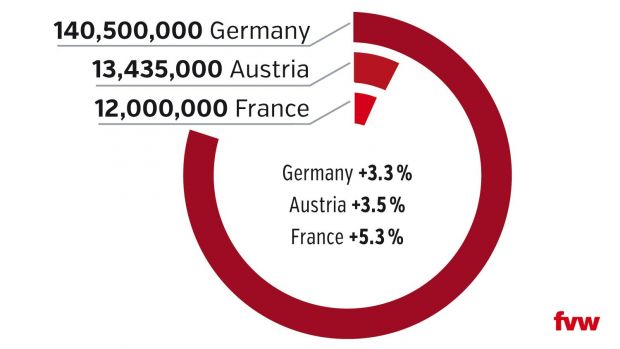 fvw
Total German visitor numbers to Germany, Austria and France in 2017, their relative size and percentage changes compared to 2016.

Further growth expected for Poland and the Netherlands

Two neighbours to the East and West are happy with rising popularity among German travellers, and the trend will continue in 2018. Poland, visited by well over six million Germans in 2017, is becoming more and more accessible. Airlines such as Wizz Air are opening up tourist regions as Masuria with their low fare flights.

The Netherlands will profit this year from the attraction of Leeuwarden. The Friesan town is, together with Malta’s capital Valletta, the European Cultural Capital for 2018. Experience shows that the media coverage and attractive cultural programmes reflect well on the whole country. German visitor numbers to the Netherlands rose about 8 per cent to just under 5 million last year.

There are signs of a turnaround in the German market for Switzerland. There was finally a slight increase once again after the euro stabilised against the franc. About 1.65 million Germans visited the country in 2017. In a five-year comparison, however, there is a clear drop of more than 200,000 arrivals.