by Paul Needham
Monday, May 28, 2018
Visitor figures from Germany are generally rising but other source markets are growing even faster, according to the newly-published fvw Destination Ranking 2018.
E-Mail Drucken 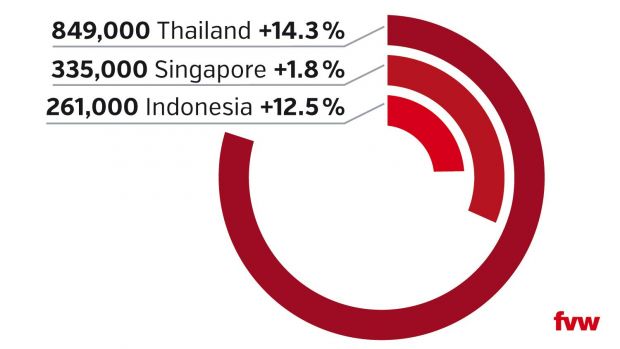 As the biggest destination in South-East Asia in volume terms, Thailand welcomed more than 35.4 million tourists in 2017. This represents growth of 8.6 per cent on the previous year and a new visitor record. From Germany came 849,000 travellers, an increase of 14.3 per cent compared to the previous year. The mood is optimistic for 2018, as well. TUI, for example, has a high number of bookings for Thailand, according to CEO Fritz Joussen.

To remain an attractive destination and to inspire visitors to return, the tourism board TAT is now planning to improve travel planning and booking options for individual travellers. TAT communications chief Tanes Petsuwan hopes that “in future the focus will also be put on niche markets”.

Despite high demand the German travel industry will have to get used to one thing: Germany is losing importance as a source market for many destinations in South-East Asia. The growth rates from intra-Asian tourism are much higher than from Western Europe. The travel desire of the new middle-classes from China and India is filling guest beds not only in Thailand but above all also in Vietnam and Malaysia.

Moreover, there is the demand from Russia, where Thailand has become the most popular long-haul destination. In the beach resorts of Vietnam visitors from Europe can see that restaurant menus and advertising banners are in Cyrillic letters at least as often as in Latin ones. Staying with the example of Vietnam: with about 200,000 arrivals Germany ranks number 14 in terms of international markets, a long way behind China (4 million), South Korea (2.4 million), the USA (614,000) and Russia (574,000).

Although the neighbouring states of Singapore and Malaysia cannot complain about a lack of demand from Germany, both countries face the question of how they can become more attractive for German visitors. In Singapore, the tourism authorities want to promote the city state more strongly with its diversity, multi-cultural lifestyle and attractive landscape. At present, the image is characterised too much by the picture of a clean but faceless metropolis, they say. With 335,000 arrivals, an increase of 1.8 per cent, Singapore was the second most popular destination for Germans in the region in 2017. However, the average length of stay there is very low at three days. In addition, only 62 per cent of visitors are “real” tourists. The others are business travellers and stopover visitors.

While Singapore profits from good air connections, Malaysia had to suffer the cancellation of direct flights to Germany in 2015. But this is set to change. In winter 2018 Condor will launch flights to Kuala Lumpur, with three planned weekly flights from Frankfurt. “Then we will get back into the market,” says Mirza Mohammed Taiyib, Director-General of Tourism Malaysia. At this year’s ITB, the country plans an initial promotion campaign focusing on Malaysia as a beach and cultural destination. Tourism Malaysia hopes for a further boost in 2019 when Malaysia will be the partner country of the world’s largest travel fair.

Smaller destinations hold their own

Myanmar can look back on a successful year in 2017. With its continuing opening-up and domestic stability – apart from the conflicts with ethnic minorities – demand from Germany has grown substantially in the last five years. In contrast, the Philippines are stagnating at a high level and want to win more German tourists to the country with increased marketing activities.