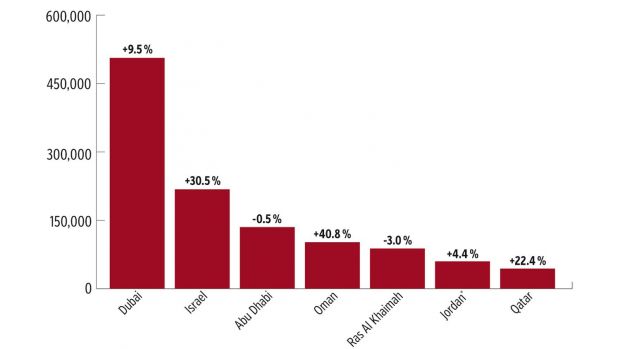 Most leading destinations in the Middle East saw higher bookings on the German market last year, according to the newly-published fvw Destination Ranking 2018.

About 30 years ago, the rulers of Dubai decided to develop the emirate into an international business centre and holiday destination. In contrast to its neighbour Abu Dhabi, the emirate does not have any sizeable oil reserves, in comparison to the neighbouring countries on the Persian Gulf. The plan succeeded. Dubai now has about 100,000 hotel rooms and has become a sizeable player on the international tourism map. The growth is not over yet. The number of hotel rooms is due to increase to 134,000 by the end of 2018, and about 70 more large hotels are planned to open by 2020.

The rise did not take place without any setbacks. In 2008, Dubai was hit hard by the worldwide economic crisis. Ambitious construction projects were stopped, and even a prestige object such as the highest building on earth, the 828-metre high Burj Khalifa, could only be completed with great efforts and the support of the ruler of Abu Dhabi.

Afterwards, though, the world economy and demand recovered again. The most popular destination in the Middle East was able to more than double the number of visitors from Germany between 2012 and 2017 from 217,000 to nearly 506,000. International demand grew over the same period from 10 million to 15.8 million visitors. In the previous 12 months, there had been a total of 14.9 million visitors from around the world.

In the meantime, neighbour Abu Dhabi is also developing its tourism industry rapidly and has seen good tourism growth in recent years. The emirate welcomed nearly 4.9 million tourists in 2017, a rise of close to ten per cent on the more than 4.4 million international arrivals registered in 2016. The emirate had already enjoyed double-digit growth from 2013 through to 2015. Germany is the emirate’s largest source market in terms of overnight stays, with some 615,000 overnights registered in 2017. About 135,000 Germans visited Abu Dhabi last year, staying five nights on average. The German market grew rapidly between 2013 and 2015 taking arrivals to over 148,000 in 2015, although it has slowed in the last two years.

Oman experienced a real boom in visitors from Germany in 2017. A total of 102,000 German tourists were welcomed in the desert state, which was a 40 per cent increase compared to the previous year. Further growth can be expected in 2018 in view of the optimism of tour operators and their expanded programmes.

Israel ended 2017 with a new visitor record. With 3.6 million guests from around the world the results of the previous year were topped by 23 per cent. Tourism in the country thus proved itself to be more crisis-resistant now than in the recent past. At the start of the new millennium tourist numbers slumped from 2.4 million in 2000 to 900,000 visitors within two years. One reason for the upturn, in the eyes of tourism minister Yariv Levin, is his policy of stronger marketing. Additional markets have been targeted with new, partly subsidised flight routes. He cites the example of the beach resort Eilat which is now flown to much more often than one year ago.

The country is also attracting more German tourists again. In 2017, there were 218,200 arrivals from Germany. This was more than 30 per cent more than the previous year and an absolute visitor record. The rising demand is now even causing shortages with hotel capacity. This is the reason why minister Levin introduced a legal change at the end of last year which will simplify the rebuilding of office buildings as hotels. In addition, builders can look forward to a subsidy of as much as 33 per cent of their costs from the ministry.

While Israel can look back on a successful year, neighbour Jordan is seeing stagnating demand from Germany. In the first half of 2017 – more recent figures are not available – the number of visitors even dropped by 1.1 per cent. The total number of foreign guests, however, increased by 11 per cent to 2.4 million in the first half-year. Most of the visitors came from other Arab countries, and above all from Saudi Arabia, which generated the largest visitor group. The highest growth rates were registered in tourist numbers from the Far East. From China alone more than 80 per cent more people travelled to Jordan than in the previous year.