Baltics, British Isles and Scandinavia remain on a high 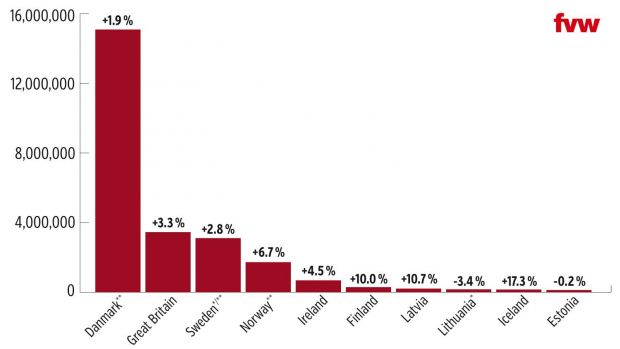 Denmark ranks first among Scandinavian countries in the favour of German holidaymakers with 15.1 million overnight stays (+1.9 per cent). Mads Schreiner, director of Visit Denmark in Germany, puts the market share of his country at 75 per cent of all Nordic trips made by Germans. At the same time, Germany is the most important source market with 60 per cent of international visitor numbers.

Sweden also generated growth, both internationally and from Germany in 2017. In addition, Norway, Finland and especially Iceland, where volumes have nearly doubled within four years, can see themselves as winners of the 2017 tourism year.

Norway has been a real success story in the last few years. Up to 2013, the incoming figures dropped to below 7.7 million overnights (Statistics Norway does not record arrival numbers), and the important German source market to some 1.3 million nights. Since then, however, the country has seen continuous growth. In 2017, the level of 10 million overnight stays by foreign visitors was only narrowly missed. German visitors accounted for about 1.8 million overnights. These were not double-digit growth rates like the previous year but still a rise of 6.7 per cent from Germany and 7.9 per cent internationally at high levels. Above all, the now permanently lower exchange rate of the Norwegian crown is likely to have played a role in this strong comeback. The country is now more affordable for German visitors.

Tourism high remains over the British Isles in 2017

With a 3 per cent increase each the United Kingdom and Ireland both proved themselves popular with German visitors in 2017. The rate of growth has slowed down, however, in both destinations. While the UK was able to improve compared with growth rates in previous years, growth for Ireland has weakened.

The British remain optimistic for 2018 especially as the weak pound means that holidays in the country are much cheaper than in the years before the Brexit vote. Visit Britain predicts a total of 41.7 million visitors from around the world in 2018. Last year some 38.9 million were counted. The tourist board hopes to strengthen tourism in all parts of the country. At present London eats up the lion’s share of volumes: nearly half of all foreign visitors travel to the capital.

For Ireland, Germany is the third-largest source market. It took only four years to increase the number of German visitors by 42 per cent. “In Germany, 2017 was our sixth year of growth in a row,” says Zoe Redmond, Central Europe director of the marketing organisation. To ensure it stays this way, Tourism Ireland launched a TV and online advertising campaign at the start of the year to bring the “diversity and beauty of Ireland” closer to Germans. The target, according to Redmond, is “an 8 per cent increase in 2018”.

Baltic States focus on cooperation instead of competition

Estonia, Latvia and Lithuania – three countries, one region. That, at least, is how the tourism authorities of the Baltic states see things. Instead of competing with each other for guests on the international market, activities are combined. One important step was the joint incoming travel trade fair Baltic Connecting, where suppliers have presented themselves since 2012. In 2018, the focus will be on the 100th anniversary of the three countries’ independence. Tourism officials hope that the presence of the Baltic states in the media during this time will generate a similar boost like in the years when they had cultural capital status. Specialist tour operators for cultural trips will take advantage of the anniversary for their own special programmes. For example, the number of German visitors to Latvia jumped in 2014 when Riga was European Cultural Capital. Instead of the usual 120,000, a total of nearly 170,000 visitors from Germany travelled to the country. This level has been exceeded year for year since then.