Australia, New Zealand and Indian Ocean on wave of success

by Paul Needham
Tuesday, May 15, 2018
Countries in the Pacific and Indian Ocean are attracting more Germans than ever to head south of the equator, according to the newly-published fvw Destination Ranking 2018.
E-Mail Drucken 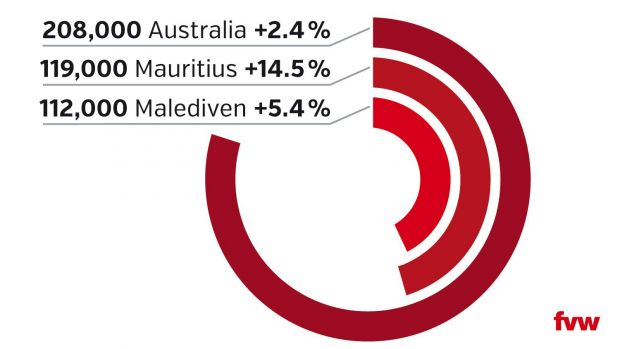 fvw
Australia is the top destination in the Pacific and Indian Ocean region for German holidaymakers but Mauritius is growing rapidly. The graphic shows total German visitor numbers last year and percentage changes compared to 2016.

Long-stay holidays in Australia are increasingly popular for young Germans. Down Under is one of the favourite destinations of well-off older pupils – whether to spend a school year abroad or for several months of ‘work and travel’. Young travellers – defined as between the ages of 15 and 29 – made up nearly 43 per cent of the 203,000 visitors from Germany in 2016. Tourism Australia has worked out that as a result the average stay of a German tourist comes to an incredible 50 days. Another interesting aspect: young visitors are mobile. 34 per cent of them visit between three and seven different locations, and 12 per cent even eight or more.

Australia’s tourism figures have grown positively in the last few years, not least thanks to this demand from young people. Since 2012 total visitor numbers from Germany have increased by 60,000 to more than 210,000 last year.

Australia, just like neighbouring New Zealand, is also a destination that is easy to travel through. Communication in English is rarely a problem for young travellers. In addition, all visitors rate their personal safety as high during their trip.

Tourism New Zealand is working to maintain this climate by steering visitor flows. “We want to strengthen the off-season in the spring and autumn, and promote lesser-visited destinations more strongly,” says Stephen England-Hall, head of the marketing organisation. This applies in particular for Germany, which is the second-largest market in Europe and especially lucrative for the country’s tourism industry.

England-Hall explains: “The length of stay and spending are relatively high compared to other markets.” Moreover, Germans overwhelmingly organise their average 46 days in the country with locally-based suppliers after having informed themselves extensively at home. In 2018, the tourism chief hopes “to maintain the high level”.

Stable outlook for paradise islands in the Indian Ocean

The Maldives, Mauritius and the Seychelles remain strong in source market Germany.

In 2017, the number of German visitors to the Maldives increased by 5.4 per cent to about 112,000. Even the repeated outbreaks of unrest have not impacted on tourism. The strict separation between the local population on the main island Malé and tourists who are taken straight to their island resorts upon arrival is paying off, in the view of suppliers. An end to growth is not in sight. Hotel investors from around the world are planning 15,000 new guest beds in the coming years. With this massive capacity expansion, the country also wants to respond above all to the strong increase in demand from China.

Optimism rules in the tourism sectors of the other two ‘paradise islands’ in the Indian Ocean as well. “Our aim is growth of 8-10 per cent,” says Sherin Francis, head of the Seychelles Tourism Board. The marketing organisation now wants to strengthen its activities in all those markets where more flights are on offer this year. Those are France, Great Britain and Switzerland, in particular. Germany was already the island group’s top source market in 2017 thanks to good flight connections. In total, more than 50,000 Germans travelled there. This was an increase of 80 per cent compared to 2012.

Growth is even more dynamic for Mauritius, where visitor numbers from Germany have more than doubled in a five-year comparison. With nearly 120,000 arrivals, Mauritius is again ahead of New Zealand for the second year in a row. German leisure airlines are responding to this continuous strong demand. Condor and Eurowings have significantly expanded their capacity on routes to the island for winter 2018/19.