German holiday bookings to major destinations in Turkey, Spain and Egypt appear to have dropped dramatically in March although demand for Greece looks better, according to the latest monthly figures from Amadeus.

March was a month to forget as offline and online booked revenues for the ten most important holiday destination airports through the travel IT company’s reservation systems slumped by 17% year-on-year. Seven of the top ten airports showed heavy double-digit drops while only two generated positive growth, bookings data showed (click on the interactive chart to compare the different months).

The biggest destination airport, Antalya, was down by 18% year-on-year after months of strong growth for the Turkish Riviera gateway. Similarly, Hurghada and Marsa Alam, the two major destination airports in Egypt, showed declines of 28% and 19% respectively, also following many months of high increases.

However, both Turkey and Egypt generated very high growth throughout most of 2018, so these figures are not quite as dramatic as they might appear.

In contrast, Spain remains a pain point for the German organised travel industry this year after weak demand in 2018.

An 11% fall in bookings for Palma last month indicates that demand for Majorca remains below traditionally high levels. There was even worse news for the Canaries with high double-digit falls for Las Palmas (-25%), Fuerteventura (-36%) and Tenerife South (-21%).

Greece generated the most optimism last month, with a 7% rise for Heraklion, the main Crete gateway, and 8% for Kos, although Rhodes dropped by a slight 1%. 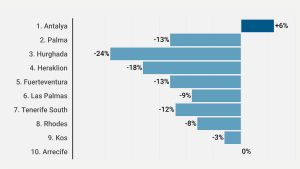