Demand picked up for the two biggest holiday destinations in Turkey and Egypt last month but German bookings for other Mediterranean destinations dropped again, the latest monthly booking figures from Amadeus show.

Antalya made a comeback in December with a 2% increase in package and online bookings through Amadeus systems after declines of 7% and 9% in the two previous months (click on interactive graphic to see previous months’ figures).

Second-placed Hurghada remained on the growth path with a 5% rise last month after a 4% rise in November. In contrast, the much smaller Egyptian destination Marsa Alam again slumped last month with a 27% drop in bookings.

All top Spanish destinations saw bookings decline in December, according to the Amadeus figures. Palma (-14%) suffered a double-digit decline for the third consecutive month.

In the Canaries, Fuerteventura (-4%) dropped back last month after a 5% improvement in November. There were again heavy declines for the other three main holiday islands: Las Palmas (-20%), Tenerife South (-16%) and Lanzarote (-21%).

Greece also had a disappointing month on the German market. Bookings for Heraklion (-9%) and Rhodes (-1%) again dropped back, according to the Amadeus figures.

Overall, there was a 5% drop in package and online bookings through Amadeus systems for the top ten destinations in December, following falls of 7% in November and 3% in October.

This left total bookings through the market-leading travel reservations company for the top ten destinations with a 7.4% decline last year. Best performers were Antalya (-0.9%), Rhodes (-3.6%) and Heraklion (-4.5%) from January to December 2019.

In terms of booking channels, online sales performed better than travel agents for the top ten destinations last year, although both channels saw lower sales than in 2018. Bookings through German travel agencies declined by 11.9% while online bookings were down by 2.8%.

In general, there were stronger online sales for Eastern Mediterranean and North Africa destinations but at lower prices, while Spanish destinations sold better through travel agencies at higher prices. The average online booking price was €738 (per person) and €980 in travel agencies, resulting in an overall average of €844. 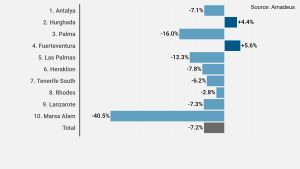 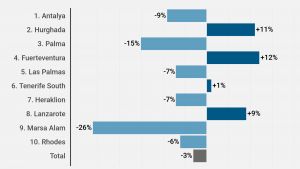 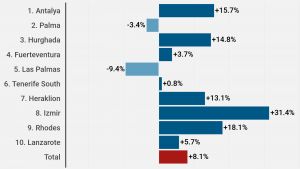