Steady growth for nearby destinations 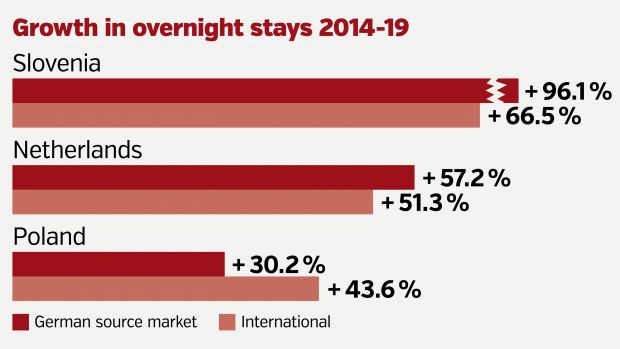 Most destinations easily reachable by car or train again showed solid growth in terms of German visitor numbers or overnight stays, continuing a general trend of the last few years. Germany itself remained by far the biggest holiday destination for Germans with a 3.9% rise in overnight stays.

The Netherlands was again very popular for German tourists last year with overnight stays rising nearly 12%. The country has seen a cumulative 57% rise on the German market over the last five years.

Another winner in 2019 was Slovenia with a similar growth rate that put it top of the five-year table. German overnight stays in the small Adriatic destination have nearly doubled since 2014.

Most other Central European destinations had to be content with single-digit increases in overnight stays by German visitors last year. Belgium, for example, had a moderate 4% rise after two years of double-digit growth and Poland was up by 3% after several years of strong increases.

In contrast, Austria and Switzerland each only achieved fractional growth last year while France showed a slight decline in German overnight stays, according to the Destination Ranking.