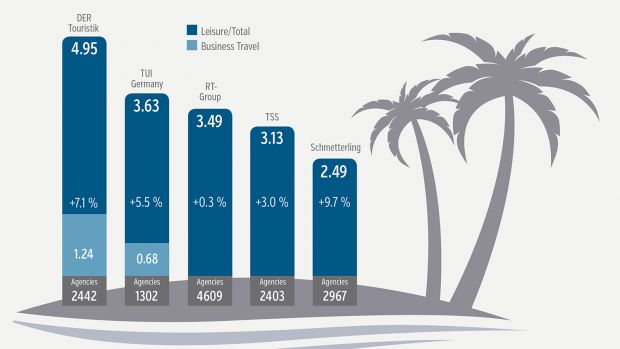 fvw
The top five travel agency organisations in Germany, with 2018 revenues in billions of euros

After a dynamic start to 2018, travel agency sales lost momentum in the spring and closed the business year with moderate growth of just 2% to €26.9 billion, according to estimates by Werner Sülberg, head of the DRV market research committee, based on figures in the fvw dossier and the GfK ‘mobility monitor’ survey of 40,000 consumers.

In contrast, the online travel sales market, covering bookings through OTAs, tour operators and travel agencies, grew by a dramatic 13% to €29.3 billion. Online sales now account for about 43% of the total €67.9 billion German leisure travel market, while ‘offline’ sales have a declining 57% (€38.6 billion) market share.

There were also major differences in growth rates within the travel agency market last year, according to fvw’s in-depth annual analysis, which covers both leisure travel and business travel sales. Sales to private customers grew by 3% to just over €19 billion, with ‘tourism’ sales (mostly package holidays) up by 3.8% to €15.4 billion. But business travel sales dropped fractionally to €7.8 billion.

The major German travel agency chains and franchise systems increased sales by 2.1% to €12.8 billion, while the looser cooperation groups grew by 3.1% to about €9.8 billion, the dossier showed.

TUI Germany also performed well with revenues (mostly leisure travel) up by 5.5% to €3.63 billion and moved up one place to second in the top five ranking.

In contrast, agencies in the TSS alliance increased their combined turnover by 3% to over €3.1 billion, while the Schmetterling alliance had a strong year with revenues up by 9.7% to just under €2.5 billion. 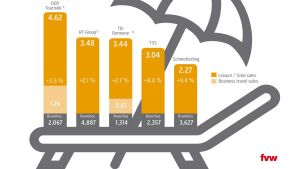