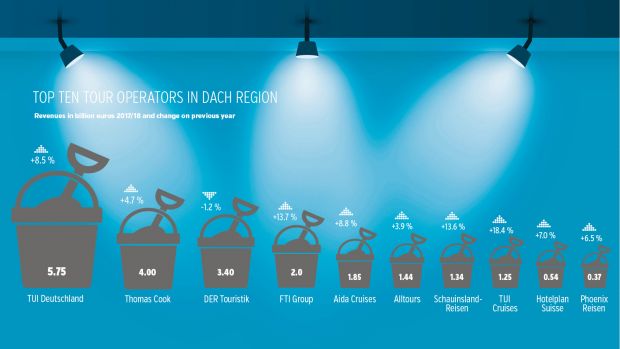 German market leader TUI outgrew most of its major competitors last year amid ups and downs for the likes of Thomas Cook, DER Touristik, FTI, Alltours and Schauinsland, according to the latest fvw dossier.

TUI increased revenues (including TUIfly seat-only sales) in Germany by 7.4% to about €5.05 billion and in the three German-speaking markets by 8.5% to €5.75 billion, according to fvw estimates. These growth rates left TUI with a market-leading 14% share both in Germany and the ‘DACH’ region (which refers to the three countries’ international codes). TUI Germany increased revenues faster than customer numbers, which were up by 7% to 6.5 million in Germany and by 7.8% to 7.3 million in the three markets on an estimated basis, due to higher selling prices. If the separate subsidiary TUI Cruises (see below) is included, then TUI Group’s market share in Germany rose to 18.1% last year, according to the market research study.

Thomas Cook (including Condor seat-only sales) underperformed the overall market last year with a moderate 4.7% rise to turnover of €4 billion in the DACH region despite a 7.4% increase in customer numbers to 7.3 million. The group had the same growth rates in Germany, according to fvw estimates, with turnover of €3.8 billion and 6.9 million customers. This left the group with a 10.6% market share in Germany and 9.7% of the regional market.

DER Touristik’s tour operator revenues dropped for the third year in a row as it failed to profit from the recovery of destinations such as Turkey and Egypt. The group’s turnover in Germany, where the tour operator business is currently being restructured, dropped by 1.2% to €2.65 billion on an estimated 5.9% fall in customer numbers to 4.9 million. Turnover in the three German-speaking markets declined by 1.2% to €3.4 billion on an estimated 4.8% drop to 6 million customers. The group’s market share fell to 7.4% in Germany and to 8.3% in the DACH region (including Kuoni and Helvetic Tours in Switzerland). These figures exclude travel agency revenues.

The biggest winner last year was once again the FTI Group with strong double-digit growth. The Munich-based group increased tour operator turnover in Germany, Austria and Switzerland by 13.7% to €2.9 billion as customer numbers soared by 11.8% to 4.75 million. Its regional market share rose to 7%. FTI did not provide any breakdown for Germany but fvw estimates its market share has increased to 7.2%, bringing it close to DER Touristik.

Germany’s largest cruise company, Aida Cruises, retained its position as the country’s fifth-largest tour operator. Its customer numbers in the DACH region increased by 4.7% to just over one million, generating an estimated 8.8% rise in turnover to €1.85 billion. This gave it a 4.5% share of the regional market.

There were contrasting fortunes last year for local rivals Alltours and Schauinsland-Reisen, which are based in nearby cities (Düsseldorf and Duisburg) in North Rhine-Westphalia, Germany’s most populated state. Sixth-placed Alltours again generated solid growth but behind the market, with regional turnover up by 3.9% to €1.4 billion on a 4% rise to over 1.7 million customers. Schauinsland returned to the double-digit growth path after two weak years and moved closer to its geographical neighbour in the fvw ranking. Its regional turnover surged by 13.6% to €1.3 billion as customer numbers went up by 12.6% to 1.6 million.

Number eight in the top ten ranking is TUI Cruises, whose revenues surged by 18.4% to €1.25 billion as customer numbers increased by nearly 14%. Switzerland’s Hotelplan Group remained in ninth place with a 7% increase in turnover to €533 million (CHF 601 million), generated purely in Switzerland. The top ten ranking is completed by river cruises specialist Phoenix Reisen with growth of 6.5% to turnover of €375 million.